Rialto to be refurbished 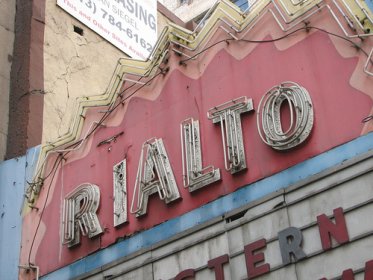 LOS ANGELES, CA — A theater many thought was past the point of no return is set to open up again. The Rialto Theatre in downtown Los Angeles is getting some major investment so it can eventually reopen as a live music venue with a restaurant.

Following the fates of many historic properties affected by the ongoing Bringing Back Broadway initiative, the currently defunct Rialto Theater has found a suitor to boost its low profile on the strip.

(Thanks to teamperks for providing the photo.)

According to an announcement made yesterday, Hollywood-based Longest Marquee LLC has signed a 25-year lease on the structure with plans to spend $6 million on renovations to reopen it as a restaurant/bar/live music venue.

Aww. Thought for a moment it would be the other Rialto.

Count me as one who thought this property would never reopen as a theatre again.

I understand some, though not all, of the interior survives. Here’s hoping that which survives will be retained and restored. There was once some very fanciful ornamental detailing in this theatre—mysterious and temple-like, which borrowed motifs from, among other things, the Lion Gate of the ancient city of Mycenae in Greece.

That’s great news. First the Orpheum then the Million Dollar. I believe the United Artists was somewhat renovated as was the Palace. Isn’t the Los Angeles Theatre next in line?

I am so glad to hear this. I was in this part of town a few years ago and my heart sank to see how badly a lot of these old relics had detiorated. I am so thrilled to know that someone is going to take this gem and bring it back to its former glory. As far as I understand the Los Angeles Concervancy is trying to refurbish downtown L.A. and make it more of a tourist destination. Hopefully that means restoring and reopening a lot of these old theatres. If any of you are interested in seeing dowtown L.A. in the 1920s watch some of Harold Lloyds films such as Safety Last, Girl Shy and For Heaven’s Sake. He shot a vast majority of his features and many of his shorts in downtown L.A. a Culver City. They are great glimpses of life more than 80 years ago.

Congrats!
I direct a non-profit organization to promote the arts and culture exchanges within our region in Miami, FL(BRAC).
We have been in desperate need to find classic, not restored theater seats… and well in Florida they are not easy to come by…
If you decide to replace the current seats in the Rialto, please drop me a line, we’ll take them off your hadns and you can make a nice donation:
B. Pernaris
BRAC