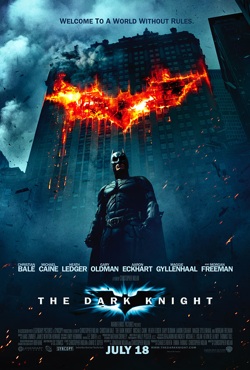 The Dark Knight has reportedly broken the three-day box office record with $155.3 million, compared to Spider-Man 3’s $151.1 million, according to USA Today and the Associated Press. Scott Bowles writes in USA Today:

There were few records left standing in Batman’s wake by the end of the weekend. With the death of Heath Ledger, who played the Joker, glowing early reviews and director Christopher Nolan’s standing with the comic-book community, it was clear that the second installment of the revitalized franchise was headed for the history books one minute into its opening weekend.

Nikki Finke’s Deadline Hollywood Daily is reporting the same numbers, but she notes that some rival studios are questioning the projected weekend total … stay tuned.

eat ur heart out spidey

The other studios are just jealous. For example, did Fox really think that Space Chimps would even beat Batman for a second?

The point probably wasn’t to “beat” Batman, but to counter-program it. Still, it seems like a crazy bad move, in a summer that’s so crowded.

Blah, blah, blah, what the heck did you expect when every freakin multiplex had the darn thing playing on 7 or 8 screens. This is exactly what I have been saying is wrong with the industry. And in 2 weeks, it will dead.

O.K. Chris, we’ll see. I’m just going to throw tis out there however. You are thinking in terms of money as far as sinking “Titanic”. I’m thinking in terms of longevity. In 1997-98. I ran “Titanic” in a 10 screen theater for 7 months, of which 6 of them it played on both screens to usually packed houses. Today I work in different 10 screen movie theatre, and we have “Dark Knight” on 3 screens. Do you think its going to be there 6 to 7 months playing to packed houses all the time? My point is, that the movie is so massed shipped, that it will make all its cash in a few weeks, and be gone. All anyone else wants today is to see which new movie could end up being # 1 of all time. I hope this clarifies the point I was trying to make.

Variety is reporting that the final numbers for the weekend are that the film grossed $158.3 M.

see the next headline on CT. BTW, Titanic played the Loews in Wayne for six or so months into the spring long before it came out on vhs during the fall of 98 and on dvd the year after. Long live Titanic!!!