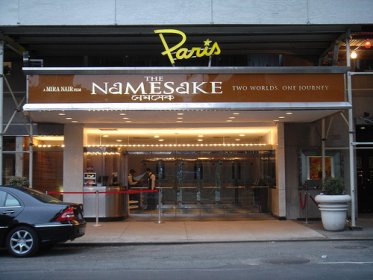 NEW YORK, NY — Great piece by Joe Queenan in the New York Times which captures in his own inimitable style the spirit of the Paris. It is said that many of the Paris patrons don’t see movies anywhere else. The fact is that for 60 years and fortunately still going, the Paris has brought NY the best of French and international cinema with the odd American picture thrown in – some of Woody’s 80’s pictures. Long live the Paris!

On Sept. 13, the Paris Theater, on 58th Street just west of Fifth Avenue, will celebrate its 60th anniversary. This is a remarkable accomplishment, as the Paris does not go in much for films in which things get blown up. In a city teeming with faux vieux Irish saloons and restaurants adorned with plaques reading “A tradition since 1988,” the single-screen Paris is the real thing, a bona fide vestige of a storied past.

The Plaza Hotel, which sits directly across the street, may no longer function exclusively as a hotel — it has added condominium units — but the Paris, with its plush seats, plush carpets, microscopic lobby, scalloped balcony and policy of showing just one film a week, remains as it long has been.

Read the full story in the New York Times.

(Thanks to kramchang for providing the photo.)

Great to see something as wonderful as this still surviving in 2008. As a longtime projectionist of over 30 years, I’m curios if they still do reel-to-reel changeovers (be it 2000 or 6000 foot reels) or did they install a platter. Either way, its still great to see a single screener survive. Here’s to another 60 years

One of my favorite movie theaters! I sit in the balcony and enjoy a film with top notch projection & sound, and a curtain that opens before the movie and closes afterwards. There are no commercials, slides or any such nonsense, and when they run trailers they are for the wonderful films that might appear. The popcorn is good and the concessions are reasonably priced. The theater is kept in perfect condition and operated in an elegant way. The Paris is an Art Moderne gem, a great arthouse, and one of New York City’s longest success stories. Long live the Paris!

My wife and I went on our first date at the Paris Theatre after we had dinner. It was Saturday December 5, 1998 and we saw LIFE IS BEAUTIFUL. On December 5, 2008, we plan to go back to the same restaurant and see whatever film is playing at the Paris afterwards.

Congrats to the Paris!As many of you know the Paris film buyer is the same as ours.Top notch!

Does anyone know if The Paris has 70mm projectors? Seems I remember a classic 70mm film playing some time ago. How nice they have curtains that work and they use them. How is the stereo sound system do they have surrounds? Are color lights used on the curtain?

Likely still has the 70mm projectors that showed “Hamlet"
I commented on the theater page that the sound is great. I believe there are surrounds. No, and I wouldn’t want color lights used on the curtain.

The Paris sounds like a beautiful theatre. Hope it stays on forever and ever.

Do they have curtains that open and close?

I saw “Harry and Tonto” at the Paris back in 1974. Unfortunately, I haven’t been back since. So many of New York’s classic single-screen movie houses, like the Sutton and the Murray Hill, are gone. I’m glad that the Paris is still going strong.

I went to the Paris for the first time this past spring to see “The Year My Parents Went On Vacation”, It is with no doubt, one of New York’s finest theatres. If you have a chance to be in Manhattan, check it out. Most of Manhattan’s art houses are small, cramped and drab, this is the light at the end of the tunnel.