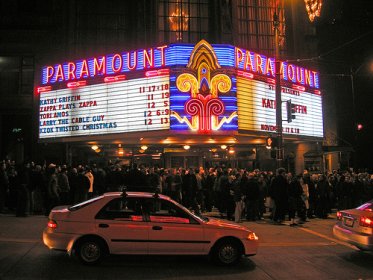 An octogenarian is still going strong at the Paramount Theatre, the last of Seattle’s 1920s theater organs still fulfilling its original purpose. The Mighty Wurlitzer pipe organ, built in 1927 and bought by the theater for $46,500, can be heard Mondays this month as part of Silent Movie Mondays, played in accompaniment to classic 1920s silent films.

“It’s really unique — it’s the only one left in the city of Seattle in its original home,” said Tom Blackwell, outgoing president of the Puget Sound Theatre Organ Society. “At one time there were 45 theaters within the Seattle city limits that had pipe organs in them. These were considered standard equipment for theaters that had silent films in the 1920s.

Read the full story in the Seattle Times.

(Thanks to A Boy and his Bike for providing the photo.)

Silent Movies and The Mighty Wurlitzer,the way movies were originally intended to be enjoyed.

Sounds cool, even though I generally lean more towards the “talkies”.

Dennis James, the final appointed House Organist for Seattle’s Paramount Theatre from 1998 to 2008 who created and introduced the theatre’s popular Silent Movie Mondays series plus frequently sold out the theatre during his 11 year tenure, continues his professional silent film and other musical presentations throughout the Northwest Area during the 2009-2010 season: