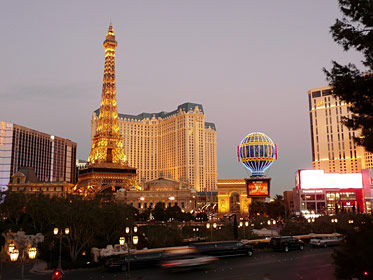 This was our first official ShoWest visit and the following is our first report of day one at the convention:

We rolled into ShoWest on Monday, March 30, following the successful Monsters vs. Aliens opening weekend. All eyes were on DreamWorks Animation and those much heralded 3-D screenings. (To get in the proper spirit, I drove up to the Arlington Theatre in Santa Barbara two days earlier to catch an afternoon matinee of the film in Real D with several hundred other moviegoers.) The film had just opened to $59.3 million, a hair under the much hoped for $60 million gross. It was certainly close enough (and more than many had expected). Jeffrey Katzenberg and many exhibitors were elated.

At the 3:00 seminar, “How to Stay Ahead of the Curve as the Industry Confronts the Future,” much of the discussion was centered on the two key words of the week: “digital” and “3-D.” Along with Cinemark Chairman Lee Roy Mitchell; Harkins Theatres CEO Dan Harkins; Rory Bruer, President, Sony Pictures Worldwide Marketing and Distribution; and Andrew Cripps, President of Paramount Pictures International—and other panelists from Rising Star Media and Vue Entertainment—a surprise panelist garnered much of the attention: Jeffrey Katzenberg. With domestic box office having a record year so far (up 11% in its first ten weeks of 2009, according to MPAA Chairman and CEO Dan Glickman), talk of tough credit markets—which have stalled new construction and some of the 3-D rollout—was overshadowed by the excitement surrounding the growing numbers of digital projection systems nationwide and by the recent 3-D frenzy. Exhibitors and distributors on the panel pledged their support for 3-D, the higher revenues these films can earn from ticketing surcharges, and the unique theatrical experience they provide. According to the panel, 3-D and digital, and plenty of good “product,” will keep theaters humming throughout the year.

All of this buzz was slightly tempered by two less euphoric assessments of 3-D that week: the first from the Los Angeles Times‘ Patrick Goldstein who noted that if you looked up 3-D in the dictionary, “you’ll see a photo of Jeffrey Katzenberg next to this definition: 'An attention-getting device, typically superficial, designed to promote the success of a product, in this case a gadget or ruse designed to get moviegoers to pay more money to see a new film.’” Ouch. I’m not sure they’ll be lunching together anytime soon. By the end of the week, Slate’s Daniel Engber was also taking his own shots in a Slate article titled, “The Problem With 3-D: It hurts your eyes. Always has, always will.” Despite the technological progress made by Dolby and Real D, Engber is not buying it.

Still, for the next three days, especially with Fox Filmed Entertainment Chairman and CEO Jim Gianopulos calling 3-D “the most exciting new exhibition technology since they put sprocket holes in celluloid,” one could have renamed ShoWest “3-D Con” and the name would have been just as apt. The buzz was everywhere and dominated several of the discussions we had with exhibitors and technology companies. And, despite Engber’s article, there seem to be far fewer consumer complaints about 3-D than there were when screen advertising became widespread a few years back. For the moment, exhibitors are, in fact, luring patrons to 3-D. DreamWorks has also pledged to release all of its future animated films in 3-D, and many other companies like Disney (Up) and Fox (Avatar) have big tentpole 3-D films in the pipeline.

Despite the euphoria, a nagging question did remain about Monday’s seminar, something I heard from a few other attendees that week: What would have happened to the 3-D excitement if Monsters vs. Aliens had underperformed? Would Katzenberg have attended this panel or even ShoWest? In the end, of course, the questions were rhetorical. This was 3-D week at ShoWest and it was apparent by the screenings offered to ShoWest attendees, the chatter during our meetings with technology providers, distributors, and exhibitors, and by large displays on the trade floor.

One more note: Hollywood has turned historian as well, looking back to the 1930s to see how exhibitors and producers weathered that economic downturn and not only survived, but prospered. With box office up across the country (even before the enormous opening weekend of Fast and Furious), there was little of the economic gloom at ShoWest that seemed apparent in Las Vegas and in recent headlines. (Architecture firms, though, are suffering by the decline in new builds.) The 1930s may turn out to be a good barometer for how the industry will perform, but with concessions accounting for a sizable amount of exhibitor profit, it’s hard to find any figures on Depression-era consumption and whether box office will continue to translate into popcorn purchases.

After the seminar, we regrouped and began to organize our thoughts for the next day’s meetings and speeches…

[Part Two, featuring our meetings with a number of different companies and our thoughts on the MPAA/NATO “State of the Industry” address, is forthcoming …]

Hmmm…I think I’ve heard something like that before….like in 1953 right after a quite dreadful little United Artists 3-D film called “Bwana Devil” opened and did land office business. All the major studios jumped on the band wagon saying 3-D was the savior of the industry which was of course competing big time with free TV back then. By late 1954 3-D in Hollywood was history! You heard the same nonsense from studio execs at the beginning of the brief (single strip) 3-D boom in the 1980’s but that one died very quickly too.

I have the feeling that by the next ShoWest not too many of the honchos will be so enthusiastically singing the praises of 3-D even though I expect there will be occasional mostly animated 3-D releases. Until they can figure a way to do 3-D without the glasses 3-D always has been and always will be a novelty.

Not that there is anything wrong with novelties you understand. I happen to be a 3-D buff who was there in the beginning, attended both of the recent 3-D film festivals in Hollywood and just caught and enjoyed “Monsters vs. Aliens” in IMAX 3-D this past weekend. I also happen to be a realist!

Yeah I know…this is digital and doesn’t have some of the drawbacks of the dual strip interlocked projector process and is an improvement on the over/under single strip film process but you still have to wear those damn glasses which darken the image among other things. Like I said before…3-D movies are a novelty pure and simple, always has been, always will be! That’s just my humble opinion of course!

By the time the week was over you never wanted to hear the word 3d again. Its like the forgot about the digital rollout..

Seriously, the only thing Cinematour has on you is photos. I don’t know why you sit still for this unneccesary years-long ass-kicking.

No Vegas winnings. We left our hotel rooms each morning at 7am and came back around midnight. As for Add-a-photo, it is coming back soon … really.

Ross: bad real estate dealings are the reason our economy is in the tank. Trying to sell me the Brooklyn Bridge is not going to impove things.