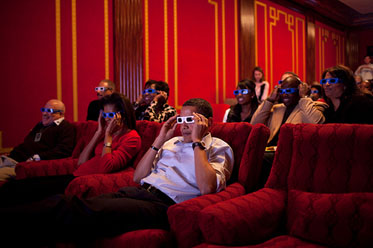 You may see the new Star Trek film before America’s 44th President. Politico reports that Barack Obama, who has made use of the White House screening room to watch “Slumdog Millionaire” and other films, has asked Paramount Pictures for a print.

President Barack Obama gets hailed by supporters as a transformational, visionary leader. But can he boldly go where no man has gone before? Possibly: POLITICO hears from several sources that the President has asked Paramount Pictures for his own screening of the new “Star Trek” film in the White House.

If I were Pres', every Saturday night would be movie night!

Dear Mr. Prez…
Like all good citizens, you should support your local cinema the same way the Royal Family does in England… and BUY a ticket!

Buying a ticket is all good but the fact of the matter is most of the movie theaters in the DC area suck. Gone are the single screen gems of yesteryear. With the exception of the Uptown, there aren’t any worthy theaters for the President and his entourage to go to. Unfortunately, the Uptown didn’t book Star Trek, which is strange because of the fact that it is advertised on the huge IMAX screen venues.

All over the country, CapnRob? LOL!

I think the White House Screening Room should be listed on Cinema Treasures, what do you think?

We have posted military base movie theaters before (the Camp Lejeune Base Theater is one example), but private screening rooms, even at studios, are not currently listed.

JodarMovieFan, for years, Paramount films went to KB Cinema and not to the Uptown. Reason right now would likely because “Angels and Demons” is arriving next week at the Uptown.

Jodar, Star Trek is over at the non-profit Avalon Theatre – what an honor if the President went to see Star Trek there!

Sounds like a very good idea Giles. Perhaps someone from the Avalon should contact the White House and suggest it.

Richard Nixon ran PATTON so many times they stopped counting.