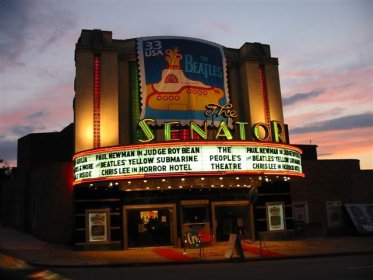 BALTIMORE, MD — I would like to give Cinema Treasures readers an update on the status of the iconic Senator Theatre.

The notoriously anti-preservation Baltimore Development Corporation (BDC) is now putting The Senator Theatre through an RFP process that will determine the theatre’s future. They have repeatedly refused to involve objective, experienced historic theater redevelopment professionals and film exhibition experts in guiding the process. They did briefly consult John Bell from the Tampa Theatre with a short list of questions by email (Bell was not allowed to see the 2 proposals under consideration), and after they received Bell’s advice, they appeared poised to do the opposite of what his advice would indicate.

I was on the BDC’s advisory panel, and attended secret meetings about the RFP process, so I have access to information that has not been made public. I resigned in protest from the panel, due to the BDC’s repeated refusals to bring historic theater redevelopment and film exhibition experts into the process.

Friends of The Senator has started a letter campaign, asking Mayor Rawlings-Blake to intervene and insist that experts in historic theater redevelopment and film exhibition must guide the process. We’ve made it easy for you to send your own letter to the Mayor at http://www.senatorletter.com

We’re not alone in this. Karen Colizzi Noonan, President of the Theatre Historical Society of America, and Johns Hopkins, Executive Director of Baltimore Heritage, have both chimed in with their own letters to the Mayor, expressing concerns that experts are not being consulted. They have also been joined by other local and national organizations and individuals.

In one of his books on Baltimore theatres, R.K. Headley noted that Baltimore has made war on its theatres for a hundred years. There used to be around 150 theaters in Baltimore. Now the BDC is working on probably doing lasting damage to the last remaining one of any significance that has been in continuous operation. Apparently, that war on Baltimore’s theaters continues.

It’s always a shame when civil “leaders” in any commnuity can’t recognize the significance and the value historic theaters bring to communities. In every major city where historic theaters/movie houses have been preserved and cultivated (with good management), they’ve turned into anchor points for redevelopment of the surrounding areas. It seems the BDC missed the anchor point concept. Since when are government meetings that will fundamentally change the nature of a community allowed to be held in secret? Is court action an option to block this activity?

JJ, I was thinking the same thing with regard to future court action. Lets hope it doesn’t come to that. I’m disappointed that they aren’t showing first run films anymore. In fact, I haven’t been to the Baltimore area for movies probably since ‘08. With the IMAX-lite installs and the Senator’s woes, there was no reason to go up there anymore.

This theatre has always been a favorite CT cinema of mine because of the curved marquee. And the future of this theatre should be to preserve it for future generations!

Please click on the senatorletter.com link, fill out the form to the Mayor and show your support to make a difference..it only takes a few minutes of your time!