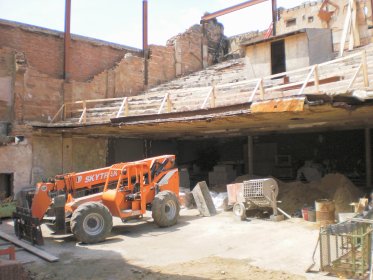 OWOSSO, MI — While in Owosso, I stopped at the Lebowsky Center and took a few pictures. Before construction began, the utility companies removed the lines which were in the way of construction. As you can see from the corner shot, Park Street was closed alongside the theater to allow for construction equipment.

Installation of new steel was already underway and repairs to the stage house were already underway. Work on the storefronts on either side of the marquee was also underway as the doors and windows were removed. A sample wall was built alongside the existing wall along Park Street to show how similar the bricks will look.

Materials were stored under the balcony for protection from the elements. Yes, plants were growing inside the theater itself. As already stated, the theater is expected to be completely enclosed again by fall. Interior work is not slated to begin until next year. 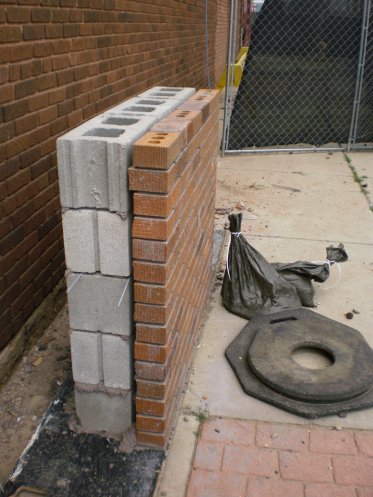 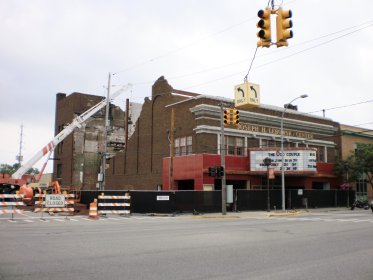 The rebuilding “ground breaking” (or should that be “first brick laying”?) ceremony is on YouTube at http://www.youtube.com/watch?v=tXSfao9Huv0

There is also a touching newly produced video at http://www.youtube.com/watch?v=tpFPB1VLRhY

I’m amazed. I honestly didn’t think they would be able to rebuild, kudos to them! I can only imagine the amount of hard work and perseverance it has taken to get to this point when it would have been easier to just give up and bulldoze it.