“Trailer Trash” at the Tilton 9 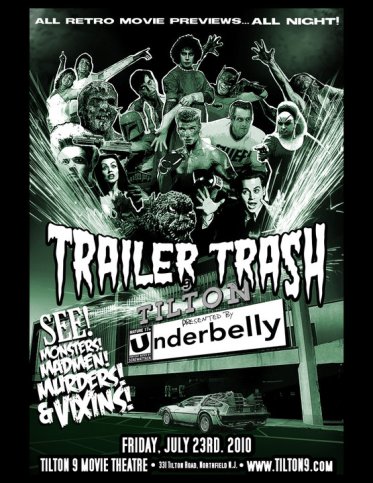 NORTHFIELD, NJ — On July 23rd at 10PM the Tilton 9 theater in will be presenting “Trailer Trash” hosted by Newt Wallen and the cast and crew of screwattack.com’s series, “Underbelly”!

The night will be filmed for an upcoming episode of “Underbelly” and will feature trivia, great grindhouse inspired prizes and other special guests.

Im excited to finely get to do this event. after 4 years and 2 other locations telling me classic events are worthless wastes of time

This event needs to be put on a DVD for everyone to enjoy, trailers and all!!!!!

Outside the main attraction of the trailers. we will have the NJ GHOSTBUSTERS charity group, members of the 501'st legion (storm trooper group) NJ ren fair members, and comic book legend Neil Vokes all on hand doing what they do best.