HorrorThon at the Lafayette Theatre this weekend 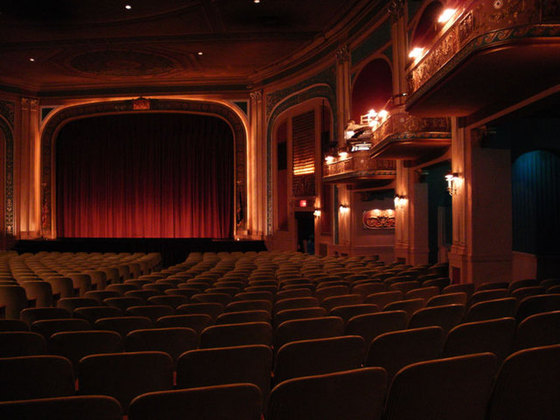 SUFFERN, NY — The historic Lafayette Theatre presents its annual salute to classic horror and science fiction films on the weekend of October 21-23, 2011.

Saturday night Drive-In Double Feature (two movies for one admission) begins at 7:30 (rare drive-in trailers and promos show between the features): “X – The Man with the X-Ray Eyes” starring Ray Milland, directed by Roger Corman plus Mario Bava’s “Planet of the Vampires”. Both features in 35mm prints from MGM

All tickets are $9.00 per show, doors open 30 minutes before showtime.

(Thanks to Peter Apruzzese for providing the gorgeous photo.)

I’ll be there for at least some of this. Looking forward to it, as always.

Folks, if you haven’t yet experienced the Lafayette… GO.

Just a note, the Metropolis show on Friday is an 8pm start.

HD version of Metropolis looks fine. If you like that version, you’ll be very pleased. Sounds great.

Mysterious Island digital ‘print’ from Sony arrives tomorrow but should look flawless and it has the new 5.1 stereo surround sound on it.

Monster that Challenged the World is a mint 35mm print, it’s pretty much new and will be great to project.

Double Feature: “X – The Man with X Ray Eyes” is near-mint and has perfect color; “Planet of the Vampires” is also near-mint with perfect color. A little treat – it has the original Italian title on it! “Terrore Nello Spazio”.

The Hound of the Baskervilles print has, unfortunately, faded color. Almost sepia-tone. MGM has no other print. We’re trying to obtain an alternate source (possibly an HD transfer), but will run the print if nothing else can be found.

Madhouse has not arrived yet.

Unfortunately the print of Madhouse was even worse than the print of Hound. We’ve decided to change out those two programs as no suitable materials for either title could be obtained.

“The Skull” (1965) (replaces the scheduled showing of The Hound of the Baskervilles), presented in HD courtesy Paramount Pictures.

“Scream and Scream Again” (1970) (replaces the scheduled showing of Madhouse), presented in 35mm courtesy of MGM.