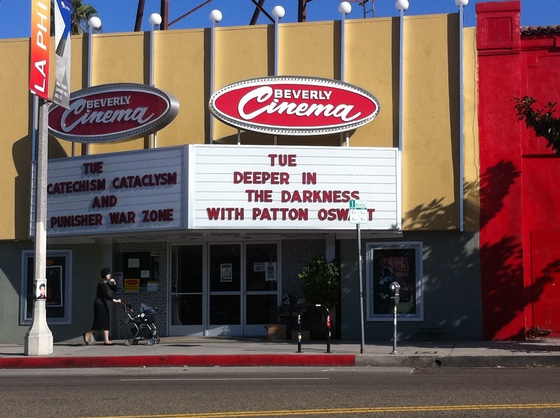 LOS ANGELES, CA — My name is Julia and I work at the New Beverly Cinema in Los Angeles, California. We are a repertory double feature house that opened in 1978. We screen films from every decade of cinema – from silents to foreign, independents, art house to contemporary. Films that make-up the glorious history of the art, that should be viewed as they were meant to be – in a theater with fellow film lovers, projected from film.

We only show films on 35mm.

The major film studios have decided that they eventually want to stop renting all archival 35mm film prints entirely because there are so few revival houses left, and because digital is cheap and the cost of storing and shipping prints is high.

I firmly believe that when you go out to the cinema, the film should be shown in 35mm. At the New Beverly, we have never been about making money – a double feature ticket costs only $8. We are passionate about cinema and film lovers. We still use a reel to reel projection system, and our projectionists care dearly about film, checking each print carefully before it screens and monitoring the film as it runs to ensure the best projection possible. With digital screenings, the projectionists will become obsolete and the film will be run by ushers pushing a button – they don’t ever have to even enter the theater.

The human touch will be entirely taken away. The New Beverly Cinema tries our hardest to be a timeless establishment that represents the best that the art of cinema has to offer. We want to remain a haven where true film lovers can watch a film as it was meant to be seen – in 35mm. Revival houses perform an undeniable service to movie watchers – a chance to watch films with an audience that would otherwise only be available for home viewing. Film is meant to be a communal experience, and nothing can surpass watching a film with a receptive audience, in a cinema, projected from a film print.

I feel very strongly about this issue and cannot stand idly by and let digital projection destroy the art that I live for. As one voice I cannot change the future, but hopefully if enough film lovers speak up, we can prove to the studios that repertory cinema is important and that we want 35mm to remain available to screen.

Please sign this petition and forward it to any cinephiles you know. Let’s fight for 35mm!

35mm live on!!! There are repertory houses in every cultural center in the world.

Save 1.33:1 silent movies on black and white nitrate film! Let’s not allow these infernal technological advances from the 20th Century destroy the art that Georges Méliès and D.W. Griffith and Buster Keaton lived for.

As for Jay… unless something has changed very recently, the Cultural Center known as New York City does not have a repertory house. Film Forum, Anthology Film Archives, Lincoln Center, BAM Cinematheque and The Museum of the Moving Image regularly show archival titles, but there is no theatre solely dedicated to revival cinema in The Big Apple.

I certainly want to continue to see 35 mm classics not DVDs or Blue Rays projected on movie screens. There are many movie theaters, often arthouses, currently with classics programs.

Julia… you are such a dear lady. You make going to a cinema what it’s all about… pure SHOWMANSHIP. If every real cinema operator was to sign this petition, then I believe we could really force the issue about this digital switch. Without being able to see the projector, I challenge ANY audience member to compare the absolute difference between celluloid and digital. The numbers will be staggering as to who is correct against the losers who are blowing it out of you know where! I dare you to accept the challenge.

I wish I was in California so I could go to the New Beverly.

Signed the petition and passed it on to a few people. Hope others are doing the same. They need to hear our voices.

Battle? The war ended 5-6 years ago. Why shake an auteur gloved fist at the studios? It was over when the global market for snapshots went digital – film for the motion picture industry was a small percent of product and revenue. The costs of manufacturing and processing motion picture film don’t work without those economies of scale.

A quick recap of some classic films I’ve seen in digital projection in a theater:

Very sad that 35mm is going away. Cut costs on product quality so stockholders can have a few extra bucks in dividends…what a brilliant idea.

Maybe museums should just start providing digital projections of art works. Those restoration and storage costs (to say nothing of the price of security guards) is simply not worth having the real thing on the wall.

Digital projection is not the same. It is an inferior product, and…unless the film being shown is something super-rare…that seriously reduces the appeal of going to a repertory screening.

If I don’t see “35mm print courtesy of….” in the advertisement, then I’m likely to stay home and enjoy equal or better quality via Blu-ray in my living room.