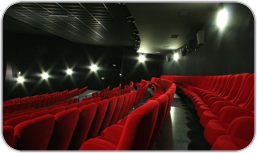 TORONTO, ONTARIO, CANADA — Christie is expanding its presence in Canada as Cineplex Entertainment will be installing 900 new digital projectors throughout their circuit, making them their exclusive provider. With coverage like this, Christie is quickly becoming the go to company for digital conversion.

Toronto, ON, (TSX: CGX), June 22, 2011 — Cineplex Entertainment (“Cineplex”) announced today that Christie Digital Systems (“Christie”) has been selected as the exclusive digital cinema projector provider, and Doremi Cinema (“Doremi”) as the exclusive provider of DCI Compliant digital cinema playback server and Integrated Media Block (IMB) for Cineplex theatres across Canada. As Cineplex continues its conversion to digital cinema, it will install more than 900 Christie digital projectors and Doremi playback servers over the next 18 months, in addition to those already installed.

“Cineplex selected Christie and Doremi Cinema because we believe their technology is the best in the business and both companies have continuously provided us with tremendous customer service,” said Ellis Jacob, President and CEO, Cineplex Entertainment. “Christie projectors provide the sharpest onscreen images so our guests can enjoy the latest movie with the clearest picture. We are also proud to support a Canadian manufacturer as the Christie projectors are built in Kitchener, Ontario. Doremi digital cinema playback servers will offer the security and stability we need to ensure we provide an uninterrupted experience.”

“As long-term business partners, we are proud to be a part of Cineplex Entertainment’s growth and impressive reputation,” says Dave Muscat, Senior Director of Canadian Sales, Christie. “Selecting Christie Solaria Series projectors shows their commitment to providing their audiences with the best movie-going experience available. They also benefit from the latest generation of high performance projection systems with the lowest cost of ownership.”

“Cineplex has always been a respected leader in Canadian cinema exhibition,” said Michael Archer, Vice President, Digital Cinema, Doremi Cinema. “We have a great relationship with Cineplex and we look forward to helping them merge their pre-show, alternative content and feature film presentations onto a single platform.”

Cineplex will use a range of Christie CP2210, CP2220, CP2230 and the new CP4230 projectors. The first CP4230 (“4K DLP Cinema® projector”) was installed at Galaxy Cinemas Waterloo in March 2011. More than 450 Christie digital projectors have already been installed across the Cineplex circuit and the balance will be done over the next 18 months.

Cineplex will continue to utilize a combination of DCP-2K4 digital cinema playback servers and IMB/ShowVaults for 2K and 4K presentations. Currently Cineplex has more than 300 Doremi servers in use across its circuit. An additional 900 Doremi servers will be installed over the course of 18 months.

About Cineplex Entertainment Cineplex Inc. (“Cineplex”) is the largest motion picture exhibitor in Canada and owns, leases or has a joint-venture interest in 129 theatres with 1,344 screens serving approximately 70 million guests annually. Headquartered in Toronto, Canada, Cineplex operates theatres from British Columbia to Quebec and is the exclusive provider of UltraAVX™ and the largest exhibitor of digital 3D and IMAX projection technologies in the country. Proudly Canadian and with a workforce of approximately 10,000 employees, the company operates the following top tier brands: Cineplex Odeon, Galaxy, Famous Players, Colossus, Coliseum, SilverCity, Cinema City and Scotiabank Theatres. Cineplex shares trade on the Toronto Stock Exchange (TSX) under the symbol “CGX”. For more information, visit www.cineplex.com.

About Christie Christie Digital Systems Canada Inc. is a global visual technologies company and is a wholly-owned subsidiary of Ushio, Inc., Japan, (JP:6925). Consistently setting the standards by being the first to market some of the world’s most advanced projectors and complete system displays, Christie is recognized as one of the most innovative visual technology companies in the world. From retail displays to Hollywood, mission critical command centers to classrooms and training simulators, Christie display solutions and projectors capture the attention of audiences around the world with dynamic and stunning images. Visit www.christiedigital.com.

About Doremi Doremi Cinema is the digital cinema hardware division of Doremi Labs Inc. located in Burbank California. For over 25 years, Doremi has been providing award winning hardware solutions for broadcast, presentation and special venue markets. Doremi’s innovative engineering group developed and introduced the first digital cinema server capable of playing JPEG2000 digital cinema movies conforming to DCI specifications. Doremi continues to build on that success by anticipating the needs of their customers and defining solutions to solve the new challenges faced by the cinema industry as it continues to make the transition to all digital exhibition. Doremi’s family of digital cinema servers and mastering stations set the standard for quality and reliability and are installed in theaters and post production facilities around the world. Doremi’s install base of digital cinema playback servers has exceeded 20,000 units globally and remains the most installed server in digital cinema history to date.

Well, it is a press release. Kind of goes along with the genre/format. :)

Hope they don’t screw up with the projection system much like what AMC and Regal are doing. I miss the days when I watch a movie on grainy film, waiting for an accident to happen if the film broke down. Never has happened in going to the movies in my life.

The switch to digital won’t make an ounce of difference if they don’t stop “saving money” by turning down the brightness of the projection lamps in their theatres. I don’t know if this is company policy or not, but friends working in the business tell me it is. My last 3 visits to their downtown Varsity cinema in Toronto seem to confirm this practice. The pictures are incredibly dark and lifeless… I won’t be going back.

I live in Toronto too and won’t go to the Varsity cinemas either for the same reason. What’s up with the dark picture on the screens there? It’s too bad, it used to be my favorate cinema downtown.

Are these digi projectors made in the USA like the Simplex That runs perfect for over 50 years? America needs to be put back to work!