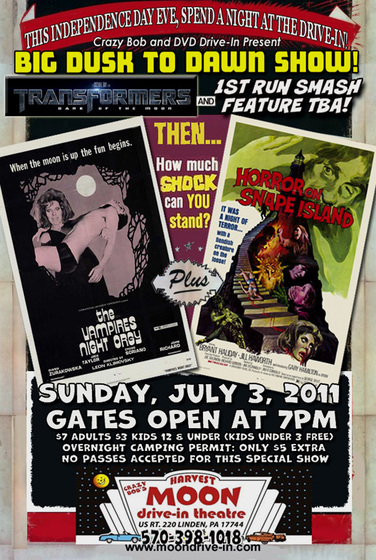 LINDEN, PA — On July 3, there will be a special event at the Harvest Moon Drive-In featuring first-run features and 1970’s horror films.

Drop the “TRANSFORMERS” put a Christopher Lee Flick in instead,any Hammer Film will do.

I wish we could drop TRANSFORMERS and the other first run movie and show a Hammer or Christopher Lee or any classic genre film instead. No one would like that more then me, but the theater is committed to the studio, so we have to show the retro features after the first run. If enough people show up to these retro shows, a whole night of Hammer horror has been discussed for next year. When you come Mike, just come a little later so you don’t have to sit through TRANSFORMERS, or hang out in the concession stand with us while it’s playing.

We are putting the second projector back in booth#1, so that we can do change overs & run 20 min. reels without splicing the leaders & tail pieces. ..Who needs digital!