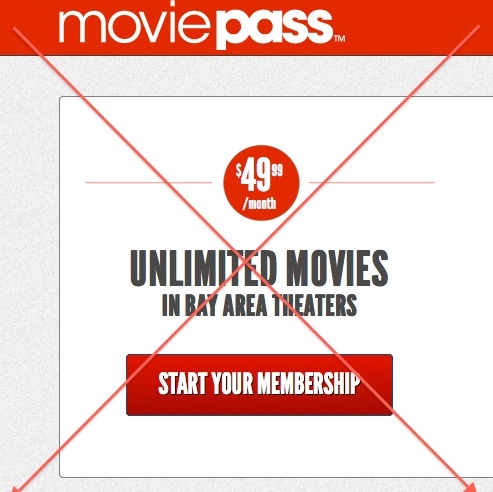 That old (inaccurate) axiom that all publicity is good publicity wasn’t true yesterday for MoviePass. The new venture that offered moviegoers unlimited movie tickets for $50 a month has placed their beta launch in San Francisco on hold after AMC and other circuits expressed deep concern and refused to participate.

According to The Hollywood Reporter, “MoviePass insisted late Thursday that the company is not going out of business. A spokeswoman said the New York-based venture has funding and still plans to move forward, but first will reach out again to theater owners including AMC.”

The thing nobody seems to remember is AMC once tried this – some chains (Dipson in Buffalo) do have a season pass program. Here’s a link to my blog which covers this in painful, painful detail: http://www.johnfinkfilms.com/Blog/Entries/2011/7/1_Movie_Pass__the_rejected_savior.html

Why they wouldn’t get theatre chain approval BEFORE launching this is RIDICULOUS!

That’s very true. There lie the perils of starting something without the approval of the necessary higher-ups before embarking on whatever one is planning on doing. This is no exception.

The deal must have been done through movietickets.com – which AMC is a part owner/founder of. This would explain the absence of Fandango Theaters owned by Cinemark (Century) and Regal which operate in SF. This would indeed be problematic for a national roll out. Still I think MoviePass is a step in the right direction, as is making moving going more social – encouraging it is step one. I hope chains will learn this is what sets them apart from watching a movie on TV. That and bigger screens.

I compare it to CarFax and Angie’s List. A cyber site can hold businesses hostage and force them to participate so the web service can make money.

Failing to sign and be a participating theatre up puts your business at a disadvantage. Theatres would be at Movie Pass' mercy.

Moviepass could lose money for theatres. If theatre chains want something like this they should do it individually. Unethical I think.

Without knowing the facts, the whole thing sounds like a racket, that’s not only unethical, but could really contribute to the demise of the movie business if it goes unchecked. It got suspended? Good. It’s best to let sleeping dogs lie, as some say.

I disagree – dhroc: I doubt a chain will be held hostage, they will still be setting their own price – if anything I’m not sure how MoviePass will make money.

Dipson Theaters in Buffalo NY offers a season pass program and their biggest in-market competior is doing just fine. Movie theatres survive by selling popcorn and soda at perverted mark-ups anyway. If this forces a certain core of movie goers to go a little more often (and thus have more to spend on popcorn/soda) then I don’t see how it’s a bad deal for anyone except MoviePass (I’m not sure how their business model will really work, perhaps they’ve got a deal with MovieTickets.com that allows for this, I’m not sure the value of which they can sell advertising can subsidize heavy movie going- I see about 250 films a year in a theatre).

What’s wrong was this was sprung on exhibitors without having procedures in place and to deal with customers with MoviePass. Once in a while on my way somewhere I’ll stop by the Dipson Theatres in Batvia which is 30 miles outside of buffalo, and it takes them a while to find the procedure for the season pass program.

The example I give is this: the other night I saw Mr. Popper’s Penguines because I had nothing else to do. If I had to pay $9 I sure as hell wouldn’t have. To make the film more palitable I got popcorn and soda. The sale that matters to the theatre (popcorn/soda) would have been lost had I decided to do something else that night. At a cost prohibitive $50 a month (double what the Dipson season pass costs me – $300 a year) unless they announce some “light” program it will only attract folks who really want to see two movies a week. But I agree, theater chains should offer a season pass program, even though those come with limitations.

I also have, over at my blog, a few ideas on how and why I think chains need to embrace a more social model for getting folks in the door, the way film festivals do it.

Maybe if the theatre chains embraced the idea of having film festivals, and therefore showing better-quality movies, instead of the schlock that they usually play, they might get people in the door, and they might end up with fewer troublemakers like that woman who was thrown out of the Alamo Draft House in Austin, TX, for refusing to cease and desist after being warned twice against cellphone use and texting. Come to think of it, it’s surprising that the jerk didn’t end up in even more trouble for leaving a phoned-in voice-mail message that was sprinkled with expletives. THAT’S against the law!

John, the ticket sale matters just as much as the concessions. It’s not like the studios take 100% of the ticket. The theaters' cut of the ticket helps cover their overhead, with concessions covering the rest and providing profit. Cutting the ticket price will only hurt theaters' profit margin.