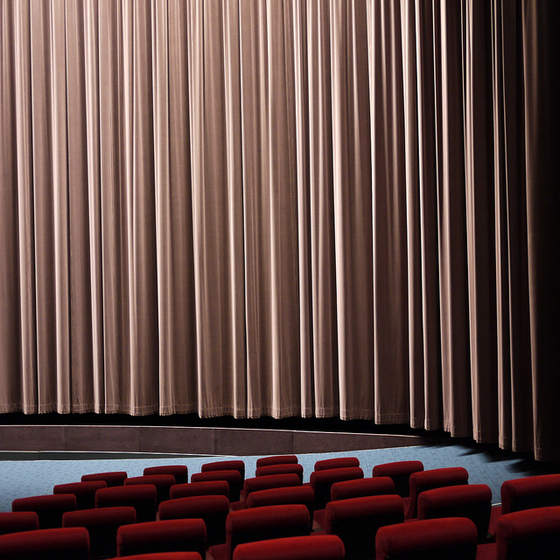 SEATTLE, WA — Never disappointing, the Cinerama Film Festival at the Seattle Cinerama has been announced and will feature rare prints of “This is Cinerama” and “How the West Was Won” along with widescreen classics. As this is one of only three theaters in the world that can properly show Cinerama films, if you can, make the trip there for this special event.

(Thank to Thank You for Shopping for providing the photo.)

The Seattle Cinerama louvered screen is way larger then the Hollywood Dome. The Dome took out the louvered Cinerama screen. They will be showing all the 70mm prints in Seattle also on the giant Cinerama louvered screen I checked with the manager Greg about this. Now only if they can get the proper lens to show It’s A Mad Mad World. The big film places have lost the negs & good prints to many of the classic 70mm films to bad.

I wonder if Seattle will be supplied with a Mad World print that’s been optically corrected for Cinerama projection onto the deeply curved screen. Or will it be a standard anamorphic 70mm Ultra-Panavison print?

Here’s an interesting just released press release about all of the Cinerama (& 1 Cinemiracle) travelogs being digitally restored for limited theatrical showings (digitally, not the three projector film process) and subsequent release on DVD and Blu-ray in the Smilebox format. If you’ve seen the Blu-ray Smilebox version of “How the West Was Won” you know how good that process can look!

Also mentioned is a Cinerama festival at the Hollywood Dome in the fall of 2012 including part digital and part 3 strip film presentations of virtually all of the Cinerama products. I’ll be there!

If only my hometown Cinerama theatre – The Indian Hills – had not met the wrecking ball 10 years ago; our screen was bigger and the interior design better than either Seattle or the Dome (ok, so I’m biased) – think of the Cinerama festival we could have put on there! And, as the walls came down as I was filming my documentary that day 10 years ago, it was possible to still see the original projectors in the booths. It’s so sad.