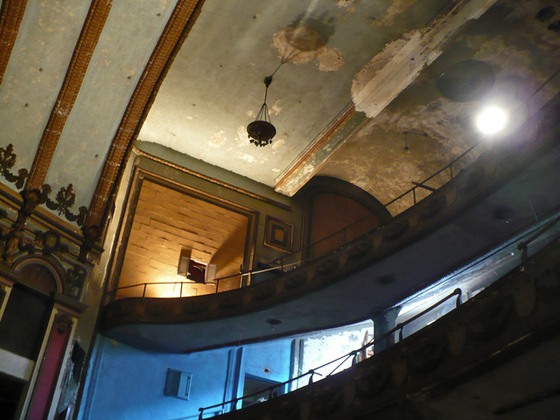 BIRMINGHAM, AL — On September 28th, 2012, the Lyric Theatre hosted its first live performance in over 60 years. The event was a benefit concert by the Chad Fisher Jazz ensemble to raise funds for the continued restoration efforts for the Lyric. To accomplish this feat, volunteers laid down new temporary plywood flooring and lighting. Patrons brought their own chairs. Special dispensation was given by the City of Birmingham, Birmingham Fire Marshal and Code Enforcement to permit this special show. 200 tickets for this performance sold out in a matter of days.

Although the theater area has substantial water damage and decay, the sound quality was nothing less than astonishing. Live jazz spilled across the audience warm and rich as honey. There appeared to be clear sight and sound lines from all parts of the main floor. The band later reported that the sound quality and natural feedback from the venue walls was incredible.

(Thanks to Bhamwiki for the photo of the pre-renovation Lyric)