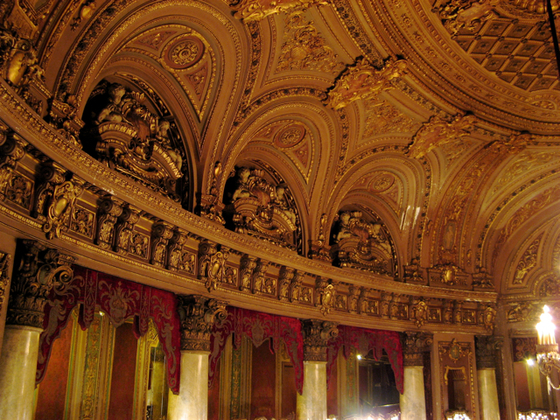 On our BIG 50ft Wide Screen

he movie features one of the most unique Christmas scenes ever committed to film. But there are plenty of other reasons to enjoy “Edward Scissorhands” this holiday season. An eccentric inventor lovingly assembles a synthetic youth named Edward. Edward has all the essential body parts – except for a pair of hands. Instead, the inventor fits him with long and sharp scissor-like extremities. These are supposed to be temporary, but when the inventor suddenly dies, Edward is doomed to a life with his scissor-like hands that are hardly conductive to day-to-day living. But despite his inherent ability to cut anyone whom he meets to shreds, Edward is a gentle soul who only wishes to be loved. The misunderstood outcast is one of the most cherished of characters in literature and film, and in “Edward Scissorhands”, director Tim Burton shows us why: The story is a touching fable, an old-fashioned parable of love and intolerance — but with a distinctly Burton-esque spin that blends in a melancholy mix of conventional horror movie, social satire and quirky comedy all filtered through the director’s fractured-Gothic sensibility. The story is set in a fairy-tale suburbia that is quietly but strikingly off-kilter, and the performers who populate this world are just as striking and just as off-kilter: Johnny Depp is perfect as the gentle, emotionally fragile title character, and Dianne Wiest’s saccharine, Avon-lady mom is delightfully loopy. Vincent Price gives his last feature performance, and his role as the mad, if kindly inventor seems an appropriate valedictory to his career. There’s been talk of late that Burton and Depp have gotten into a rut working together, but whatever side of that debate you’re on, both are at the top of their form in “Edward Scissorhands” — a charming tale, beautifully realized, and, like its protagonist, nothing if not unique.

Long ago, there was one Christmastime when you went to a big old theatre, the kind that looked like a palace, for a special holiday show. There was a concert of Christmas carols performed by singers with wonderful voices and music from one of the biggest pipe organs you’d ever seen or heard. Plus you got to sing along to some of the songs. Santa Claus was even there. And then you enjoyed a holiday movie on the theatre’s enormous screen. No matter if this is one of your most cherished memories — or a memory you only wished you had, now you can re-live it!

Saturday, December 8 6:30PM Live Holiday Concert PLUS Sing-Along. Enjoy the most cherished and beautiful music of the season performed by soloists Theresa Blunda and Howard Richman joined by the Choir of St. Dominick’s Academy, all accompanied by the power and majesty of the Loew’s extraordinary Wonder Morton pipe organ. The finale will revive a great old movie theatre tradition – an audience sing-along with words projected on screen. And Santa himself will host.

Saturday, December 8 7:45PM “Elf” Starring Will Ferrell, Ed Asner, James Caan, Mary Steenburgen, Bob Newhart. Directed by John Favreau. 2003, 97mins.Color One Christmas Eve, a baby crawled into Santa’s bag of toys… and was accidentally taken back to the North Pole. He was raised as an elf, but grew up to be three times bigger than any other elf. When he is finally told that he’s not really an elf, Buddy (played by Will Ferrell) decides to go looking for his real place in the world. He lands in New York City at Christmastime and tries to navigate a world he knows nothing about. Along the way he finds his workaholic father (who’s on Santa’s “naughty list”), a new mother and a 10-year-old brother who doesn’t believe in Santa Claus. In the end, Buddy saves Christmas for his rediscovered family and all of New York. Fish-out-of-water stories are a stock in trade for Hollywood. This one works so well because Ferrell is so good at making you laugh while also making you believe he really is that naïve. It also works because of the great supporting cast, which like any good holiday gathering is filled with familiar faces, such as Bob Newhart, Ed Asner, James Caan and Mary Steenburgen. And finally, the movie works so well because it is simultaneously a loving embrace of all that is familiar about the holidays and a gentle send-up of some of the season’s excesses. “Elf' is a fun holiday movie for all ages.

The Loew’s is wheelchair accessible. Assistive hearing equipment is available for most screenings. o. Classic Film Weekends are presented by Friends of the Loew’s, Inc.