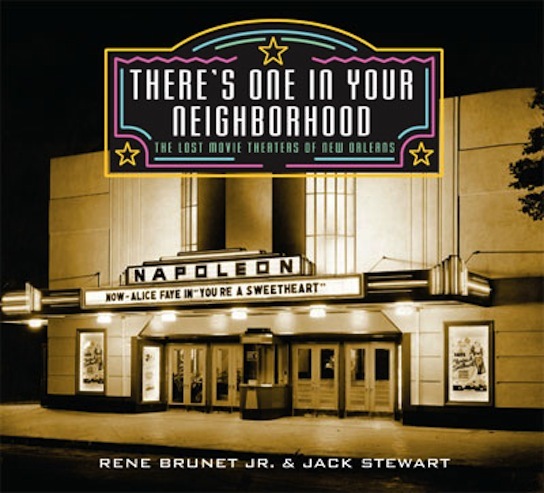 If you live in New Orleans and love movies (and movie theaters), you’ll definitely know the name Rene Brunet who — at 91 years old — is still running the city’s incomparable Prytania Theater. Over the past few years, the charismatic Brunet has also been working with urbanologist Jack Stewart and New Orleans publisher Arthur Hardy to produce a lavish 160-page book chronicling the appearance and disappearance of over 100 theaters in Metro New Orleans.

“New Orleans is a city of neighborhoods,” the book’s website notes. “And once upon a time, each of those neighborhoods included one or more movie theaters. Since 1896 when the nation’s first movie house, VitaScope Hall, opened on Canal Street, nearly 200 neighborhood theaters have come and gone. These entertainment venues were more than places where motion pictures were projected onto giant screens. They were community centers where people gathered and where memories were made. There’s One In Your Neighborhood—The Lost Movie Theaters of New Orleans presents the history of more than 100 neighborhood theaters that will be familiar to Baby Boomer and younger generations.”

The book is listed for $25.95 and can be ordered now via Paypal through the Prytania Theater website.

Purchase “There’s One In Your Neighborhood” via PayPal