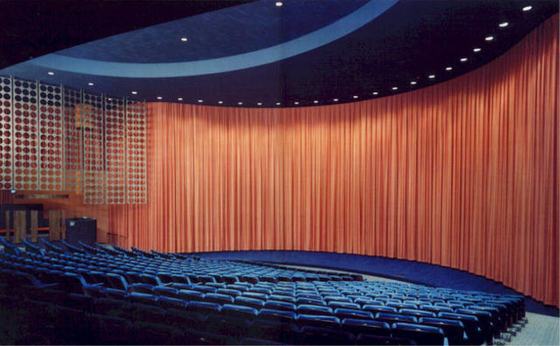 DENVER, CO — An archival video from British Pathe features a preview event for the “Brothers Grimm” at the Cooper Theatre. A 3 strip print of this film could see the light of day at the 70mm festival later this year.

(Thanks to Bill Heulbig for providing the photo.)

In this case it appears to have been a screening in advance of the official premiere. One online source indicates that this Denver event occurred on July 14, 1962, and that the film’s composer was working on the film’s score up until July 17. According Michael Coate’s lists, the film had a simultaneous premiere in New York and Los Angeles on August 7, and the Denver public run began on August 8.

My guess is that this July 14 preview was a media event to draw attention to the film and for the Cooper Foundation to show of its new purpose-built Cinerama house.

Ah, so the 3 strip print that “might” surface later this year is of Brother Grimm itself, not the “archival video”

Why are British Pathe clips so expensive ?

A 3-strip Cinerama print of Brothers Grimm is supposed to be shown at the Bradford, England Cinerama theater in April 2012. It is supposed to be in excellent condition too. I only hope it’ll get shown in LA or Seattle as well – a perfect way to celebrate the 60th anniversary of Cinerama.

I am curious as to the origin of this three-strip print; over the last couple of years, most online sources that have information about this film having been saying that no three-strip prints survive and that the negatives and other elements that could be used for a restoration were severely water-damaged. TCM has shown a roadshow version but I have been unable to find really anything about its origin either.

CSWalczak’s comment of Feb. 6 implies the Denver entry in my Cinerama series does not mention the World Press Preview of “The Wonderful World of the Brothers Grimm” and that my release date info conflicts with other sources. The fact is details of that World Press Preview were included. It’s mentioned in the Trivia section near the end of the article.

I am sorry that you thought that Michael; that was not my intent. I was using your lists to ascertain the gap between the July 14 event and the actual public premiere; I did not mean to suggest that you were unaware of the July 14 event nor that the event was omitted from your carefully researched lists.