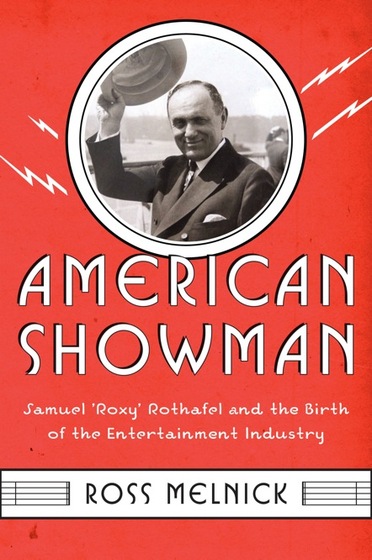 Cinema Treasures is excited to announce the publication of a new book, “American Showman: Samuel ‘Roxy’ Rothafel and the Birth of the Entertainment Industry” (Columbia University Press, 2012) by Ross Melnick and a 30% discount for Cinema Treasures users and Theatre Historical Society members.

“Roxy” (1882-1936) built an enormously influential career as film exhibitor, stage producer, radio broadcaster, musical arranger, war propagandist, and international celebrity. He managed many of New York’s most important theaters, including the Regent, Strand, Rialto, Rivoli, Capitol, Roxy, and Radio City Music Hall, and was one of the nation’s most celebrated broadcasters from 1922-1935 on NBC and CBS.

He also helped engineer the integration of film, music, and live performance in silent film exhibition; scored early Fox Movietone films such as Sunrise (1927) and Street Angel (1928); pioneered the convergence of film, broadcasting, and music publishing and recording in the 1920s; and helped movies and moviegoing become the dominant form of mass entertainment between the world wars.

Regularly cited as one of the twelve most important figures in the film and radio industries, Roxy was instrumental to the development of film exhibition and commercial broadcasting, musical accompaniment, and a new, convergent entertainment industry. “American Showman” is the first book to examine Rothafel’s multifaceted career in film, music, and broadcasting.

“It’s about time that we are finally getting the full story of America’s most daring and successful showman…. Ross Melnick’s book is that rare combination of in-depth research and a great read. Finally, Roxy has received his due.” – Rick Altman, University of Iowa, author of Silent Film Sound

“American Showman” is also available from Amazon – US and UK – Barnes & Noble, and other retailers. 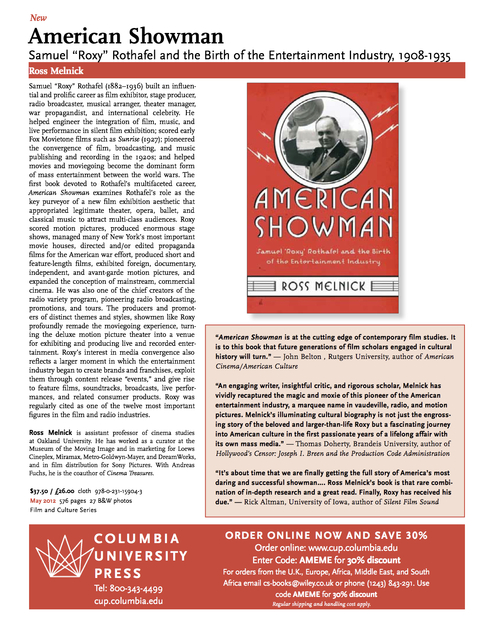 I’m sure it must be a wonderful book.

From the preview pages on the Amazon site, I gather that the Melnick book is heavy on the detail (“the curse of scholarship,” we call it in academia). The man has certainly done his research, no doubt about it. Ben Hall’s “The Best Remaining Seats,” in which Roxy holds a central position, is probably more accessible for the typical reader, and there are other books specifically on Samuel Rothafel. I’m fortunate enough to own a first edition of the Hall book (c. 1961, o.p.), and I did see a movie at the New York Roxy in the late 1950s, long after its glory days with symphony orchestra in the pit. I don’t have much memory of the theater (it was awfully dark in there!), but it gives me small bragging rights in my dotage.

Having said all this, I’m probably going to order the book, because (as a retired professor myself) I’m willing to wade through the detail, and also because Roxy spent part of his early life in my adopted state, up in n.e. Pennsylvania (specifically, the area around Forest City and Carbondale in Susquehanna County, in the Northern Anthracite Field—-really the sticks, folks). I’m sure it will be money well spent!

Thanks, Henry. I hope the book will be engaging for those inside and outside academe. It was certainly written with both audiences in mind. By the way, there is an examination (of course) of Roxy’s time in Carbondale and Forest City and the many other small cities and towns he lived and/or worked in before arriving in New York. I look forward to your thoughts! — Ross

I have to admit to a life long obsession with the legendary New York Roxy ever since,, as a young man I bought a copy of “The best remaining seats” by Ben M. Hall, which was a celebration of the famous theatre just after its unforgivable destruction. I never saw the Roxy and it remains to this day one of my greatest regrets. I’m sure this will be an interesting book.

Book arrived today. Am plunging right in and will update from time to time. Looks good so far.

Finished book this week. Very thorough telling of Roxy’s life story: his life, like the book, ended too soon and leaves you wanting more. I even read the footnotes! Two comments, not intended to distract from the very positive aspects: 1) It’s a tad repetitive in spots, but Roxy had a busy career and there is a lot to cover; 2) More photographs, and higher quality reproduction, would have filled out the story considerably (publisher please take note!). Readers will certainly want to look up on this website the various theaters mentioned, and those with access to Ben Hall’s book, with its unparalled collection of period photos, will want it close at hand. Overall, a good read, especially for us theater geeks, and one which makes me regret again that I missed out on the glorious era it chronicles.

This site is truly incredible. The data here will unquestionably be of some assistance to me. Much obliged!. college

I havent any word to value this post…..Really i am inspired from this post….the individual who make this post it was an extraordinary human..thanks for imparted this to us. Крест лидера

I am trusting the same best exertion from you later on also. Truth be told your exploratory writing abilities has motivated me. Bluehost review

Your website is really cool and this is a great inspiring article.Web Design Company Adelaide

The information you have posted is very useful. The sites you have referred was good. Thanks for sharing..SEO agency Philippines

Fabulous site you have here, so much cool data!.. South Delhi Coworking Space

The information you have posted is very useful. The sites you have referred was good. Thanks for sharing..atomic profits review

Best Realtors in Surrey to list your home or condo. A Chinese speaking Realtor that can converse in Mandarin, Cantonese, and English. A Top 1% PREC Team Member for over 10 years in a row. A Team that knows how to get the best deal for you through negotiations and knowledge of Surrey Real Estateresource management software

There are actually a trio of different years while using Chicago Diet and each and every very first is absolutely vital. The pioneer step is your the actual fat reduction . for this kilograms. lose belly fat토토 / 토토사이트

I enjoy the design, nice post by the way. réalisation Netref

thanks for this blog!! car racing games