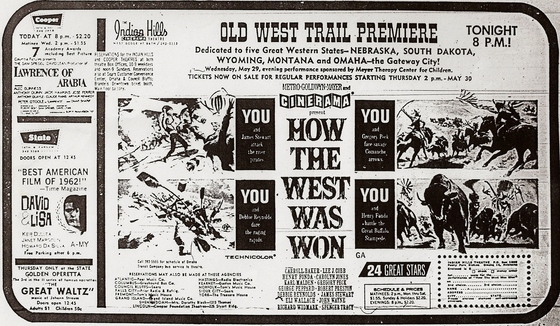 The following is a semi-regular series of retrospectives on CINERAMA, the legendary motion picture process that kicked off the widescreen revolution. The series focuses on providing a market-by-market historical record of when and where Cinerama and its multi-panel clones were exhibited. These easy-to-reference articles serve to provide nostalgia to those who experienced the Cinerama presentations when they were new and to honor the movie palaces in which the memorable screenings took place.

THIS IS CINERAMA
Theater: Cooper
Premiere Date: February 15, 1961
Engagement Duration: 22 weeks
Projection Format: 3-strip / 26 frames per second / 7-track stereo
Promotional Hype: “At last! It’s coming to Omaha! The Cooper Theatre in Omaha is being completely restyled at a cost of $150,000. The Cooper will be the only theatre in Nebraska-Iowa that will or can show CINERAMA productions.”

THE WONDERFUL WORLD OF THE BROTHERS GRIMM
Indian Hills
December 21, 1962
23 weeks
3-strip / 24fps / 7-track stereo
“A new era in entertainment in the Midwest with the opening of the new Indian Hills Theatre. A unique ‘Symphony In The Round,’ it was designed exclusive for the showing of CINERAMA productions from the wonderfully comfortable loge seats to the magnificent CINERAMA sound system – you are surrounded by luxury!” “The first dramatic story-telling motion picture in fabulous CINERAMA”

KRAKATOA, EAST OF JAVA
Indian Hills
August 13, 1969
8 weeks
70mm / 24fps / 6-track stereo
“The NEW CINERAMA hurls YOU into the incredible day that shook the earth to its core!”

CINERAMA FILMS NOT SHOWN IN OMAHA:
SEARCH FOR PARADISE
HOLIDAY IN SPAIN
THE BEST OF CINERAMA
MEDITERRANEAN HOLIDAY
RUSSIAN ADVENTURE
CUSTER OF THE WEST (general release only)

TRIVIA / NOTES:
Omaha was the first (and only) market in Nebraska, the 31st market in the United States, the 34th market in North America, and the 53rd market in the world to equip for Cinerama presentations.

The Indian Hills was the fourth purpose-built Cinerama theater in the United States and at the time of its opening boasted the world’s largest (indoor) screen, with a width (measured along the curve) of just over 100’.

This, of course reminds me of them tearing down that GREAT CINERAMA theater, the Indian Hills, to make a hospital parking lot, even after all those protests!

I remember “How The West Was Won”! It was a good, well-done film, which my sister and I saw in the West Newton Cinema (which is still open, btw), pretty much when it first came out.

I also might add that I had to talk my mom into letting my sister and I see “How The West Was Won.”, because, for all kinds of undisclosed reasons, she really didn’t want my sister and I to see that particular movie.

Any idea when Providence will be covered? I worked saw movies there as a kid, worked there as a teen and eventually ran it past its glory days. Nick

I’m a new poster. I LOVE this series. What a great idea. Any chance of adding Buffalo, New York to the series? Buffalo was my home town and a big Roadshow market in the 1950’s and 60’s. The Loew’s Teck(formerly Shea’s) was the major Theater to show the three strip Cinerama and other wide screen events of the era. Our family spent many a happy time in that theater. If any of you other posters are planning a trip to Los Angeles or already live here, you will probably be interested to know that Arclight Cinemas will be having a 60th birthday celebration in honor of Cinerama from September 28 to October 4, 2012. They will be playing all of the Cinerama Travelogues as well as THE WONDERFUL WORLD OF THE BROTHERS GRIMM, HOW THE WEST WAS WON, IT’S A MAD MAD MAD MAD WORLD, and 2001: A SPACE ODYSSEY. They will all be played in the Cinerama Dome on Sunset Blvd.

To MPOL. If you saw HTWWW at the West Newton theatre you did not see it when it 1st came out. You saw the 35mm composite of all 3 strips. This was very annoying. HTWWW played at the Boston Cinerama in 3 strip Cinerama for 33 wks. The West Newton was not big enough for Cinerama. I was only there one time in 1950 to see the Documentary of Kon Tiki. Had relatives who lived down the street on Annapolis Rd which is off of Cherry St.

I am cheerful to discover this post Very helpful for me, as it contains parcel of data. I Always want to peruse The Quality and happy I discovered this thing in you post. Much oblig Joom Group