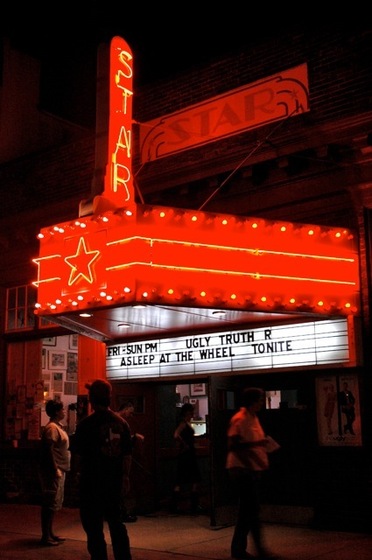 BERKELEY SPRINGS, WV — Since the beginning of the year, moviegoers in Berkeley Springs, West Virginia have experienced an improved version of the main nightlife in the small town. Their nearly 100-year-old movie house has “gone digital.”

Once the mom and pop owners of the Star Theatre learned that movies would no longer be made on film, Jack Soronen and Jeanne Mozier knew they had a choice to make. “We had to go digital or close,” said Mozier. “We knew we couldn’t abandon our town to no movies so we made the only decision possible.”

It was the high cost of the equipment that gave them pause. “It cost virtually every dime in profit we’d made since we opened,” Mozier said, “and about twice what we paid for the business and building originally.” There was no financial assistance from the movie industry and the couple did not think it was appropriate to fundraise. “This is a private enterprise.”

Once they decided on the changeover, they made other upgrades as well. “An improved image deserved a new screen,” said Soronen. The Star also received a new coat of paint inside and out. “We had to raise ticket prices. We wanted people to be able see some changes beyond the obviously better image on the screen.”

Even with new, higher prices, the Star Theatre remains a bargain. Adult tickets increased from $3.75 to $4.50. “No one seemed to notice; at least they never mentioned it,” Mozier said. “My friends from the city laughed saying it brought us to about 1995 levels.”

It was a challenging learning experience for Soronen who has been the theater’s projectionist since he and Mozier bought the business more than 30 years ago. Originally, Soronen used the two carbon-rod Brenkert projectors installed by the Alpine chain which leased the theater in 1949. In 2002, when the last American manufacturer of the carbon rods stopped production, the Star upgraded to a xenon bulb, platter system. “It was a major quality of life improvement for Jack,” said Mozier. “No more sweating in the projection booth through the whole movie waiting to switch from one projector to another every twenty minutes or so to replace the rods which burned to provide the light.”

A team of four friends helped Soronen empty the existing projection booth of the 2002 system and move in the new equipment acquired from Ballantyne-Strong in Omaha, Nebraska. Once in place, a pair of technicians from Cardinal Sound in Elkridge, Maryland, spent several hours hooking up the new equipment, setting image and sound. Soronen was on the phone with them all the next day as they worked to adjust software. Then came the digital opening night and he held his breath as he flipped the switch on the server.

“It reminded us of our original opening night on October 1, 1977,” Mozier recalled. “We turned on the projectors for the first time the previous day. Opening night was sold out. TV crews were out front and we were waiting for the friend of a friend who was coming to show the film — and teach Jack. He arrived about 10 minutes before start time.” Soronen had it easier in 2013. With the digital system, the movie could be shown from Cardinal’s remote connection. “Fortunately, the fail-safe wasn’t necessary. It would have felt like cheating.”

Like many of the Star’s audience, local patron, Ken Troy, was impressed by the new, crisp image on the screen. “It looks great and the prices are still the best around,” said Troy. “But the most important part is they didn’t change the popcorn machine.”

Located in a brick building on a main corner in town, the Star Theatre is on the West Virginia Historic Theater Trail. Movies have been shown there since 1928. Soronen and Mozier are only the theater’s third owners. One first-run movie a weekend is shown at 8pm on Friday, Saturday and Sunday year ‘round. Check www.starwv.com or call 304-258-1404 for what’s playing.

(Thanks to Jeanne Mozier for providing the photo.)