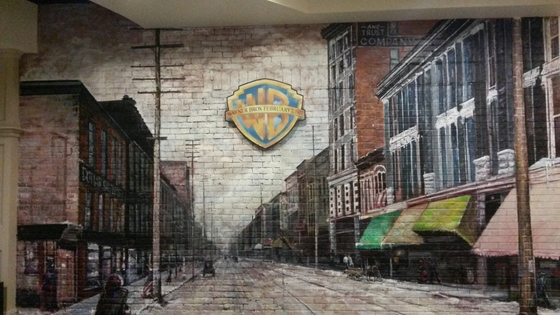 Cass Warner, CEO of Warner Sisters Inc. and granddaughter of Harry Warner, one of the original four founding members of the Warner Brothers entertainment empire, addressed approximately 100 well-wishers at the site of the old Cascade Theatre in downtown New Castle.

The inaugural event displayed the museum’s first-completed attraction, a mural depicting old New Castle, by local artist Ken Cole, which covers one wall in the entryway.

Representing the Scottish Rite Cathedral, Rob Cummins, president, and Dawn Piroli, coordinator, announced a joint entertainment project with WFC at the magnificent 2,700 seat Cathedral auditorium in New Castle – beginning with a “Gala Hollywood Party” featuring dinner, a movie, and dancing, Friday, November 22. Information about that event can be found at www.picturepalaceseries.com.

Rita Dorsch, WFC Community Development Trustee, introduced a fundraising campaign with a “Kickstarter” video, designed to make $23,078 – one dollar for every current resident of New Castle – for WFC’s educational and entertainment goals in the city.

The Marine Corps Reserves also partnered with WFC to place a “Toys for Tots” receptacle at the museum’s entrance.

The Cascade Theatre, the first theater operated by the four famous brothers, opened on Feb. 2, 1907, and is currently under redevelopment and restoration by the Warner Film Center, a non-profit organization. The WFC was organized over 15 years ago by the group’s president, Jerry Kern of New Castle, to protect and revitalize this historic site.

Ms. Warner, of Los Angeles, serves on the Board of Advisors of the Warner Film Center and came to New Castle to show her on-going support for the museum dedicated to the memory of her family’s enterprise.

The crowd rose to its feet in a standing ovation when Mr. Kern told the story of the first “Toys for Tots” Campaign. Marine Corps Reservists began the program in 1947 with the support of Warner Brothers Movie Theatres in Los Angeles.

Yesterday’s event commemorated that beginning with a new partnership between local Marine Reserves and WFC. A Marine in dress blues installed a container in front of the Cascade Theatre, and Karen Kern, wife of Jerry, with the Marines’ Hymn playing in the background, placed a Raggedy Anne Doll in the container. A Raggedy Ann doll was the first toy donated in 1947.

Joining the others at the rostrum, Jack Oberleitner, WFC trustee and Project Development Director, said that he welcomed the participation of current, former, and “in spirit” residents of New Castle in supporting the redevelopment and revitalization of the downtown area, and invited potential Advisory Board members and volunteers.

Here is the event yesterday on TV.

This is another great example of profit and nonprofits working together to make a community a better place to live. Here we have the Warner Film Center, the Marine Corps League, Eckles Architect, the Scottish Rite Cathedral, Lawrence County Tourism, the Lawrence County Historical Society, and both County and City officials all working together to preserve history and improve our downtown.