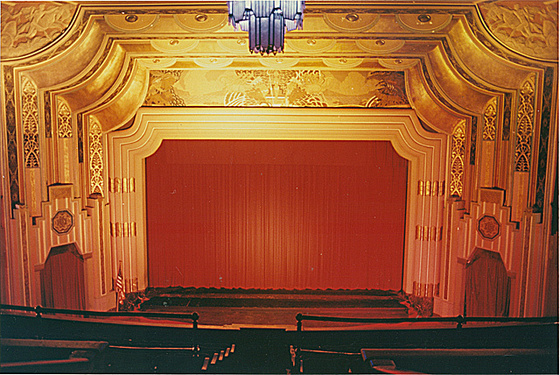 PHILADELPHIA, PA — A proposal by iPic Theatres could lead to an eight screen theatre and restaurant in new construction replacing all but the front of the Boyd Theatre. This can only go forward if iPic can prove that restoring the theatre would be cost prohibitive. Howard Haas of Friends of the Boyd strongly opposes the proposal due to the irreparable damage it would cause.

Further information and quotes from Haas are available at Philly.com and Hidden City.

(Thanks to Michael Wakely for providing the photo.)

Yet again another presumptive, offensive (“This can only go foward…” Really, says who?) and anti-business screed from the Haas and his “friends” who have allowed naive, sentimental and anti-business rhetoric to get in the way of an irrevocable truth: The. Boyd. Is. Not. Coming. Back.

And before the “preservationists” flame me (or worse, as Haas is wont to do, delete me) I would like nothing more than the former Sameric to turn into a East Coast version of the IMAX Chinese Theater. But guess what: this is never going to happen. If Clear Channel could not do it, who is going to provide Howard with the 41 million (according to iPic) to renovate the theater? Comcast?

That said, what everyone should consider is allowing iPic to move forward and bring movies to Chestnut Street once again. Otherwise, 11 years will pass, the building will be a boarded-up eyesore (with a Gap Outlet, no less), joining the empty lot at 19th and Walnut (interesting that no one talks about the “preservationist” debacle that nixed a high-end theater proposal from Posel) as a stark reminder that Philadelphia, save for the Ritz (Landmark) Chain (which is also in decline and in the case of the Ritz Five, at risk for demolition) is one of the least desirable cities in the US for exhibition.

I just got done reading the newspaper about the classic boyd theatre,that theatre don’t to be torn down at all. the boyd theatre is the last classic movie theatre in philly. I used to go to that theatre all of the time it is avery nice theatre and more people who just love classic movie theatre should help and save this theatre from being torn down. I would to see some of the best classic movies there and plays as well. phila.has lost so many classic theatres in center city phila. to me center city phila was the to see lots of movies there,we lost the fox theatre,we lost the milgram,we lost the stage door cinema,we lost the duke and duchess and so on.

the mayor of phila.should help the friends of the boyd to help and save this classic theatre.

It’s time that someone thinks outside the box. To “develop” this magnificent theatre into 8 living room size theatres is a travesty. However, since it has been closed no one has come up with a viable alternative. Creating another “live theatre” is a waste. The Forrest and Merriam theatres are totally underused. I will not pay the price to see a Broadway show at the Academy of Music. The Academy is a beautiful venue, but to me not condusive to broadway show presentations. Then you have the Prince Music Theatre – look how successful that has been. It would have been better to stay as the Midtown. At least that was a draw to bring people to Chestnut street. Philly can come up with all the support for its mostly loosing sports teams. However, you would think there would be at least enough people interested in saving the Boyd. However, what is needed is a person that can think outside the box. It has to be a destination location. It was back when it was the Boyd Cinerama Theatre. People traveled from the tri-state area to see those films. Our family traveled from Lancaster to see everyone one of them. Then we continued visiting the Boyd for the 70mm roadshow presentations that extened to the Stanley, Midtown, Ranolph, Goldman, and Fox Theatres. All now history except the Boyd. Look what has been done to the Chinese Theatre in LA. I will admit LA is certainly more a movie town than Philly, but that was thinking outside the box. Who would have thought the Chinese Theatre would once again be a “destination theatre.” Why can’t the Boyd??!!

I seriously doubt that they would put a multiplex there, what kind of films will it play? The reason why there isn’t a general motion picture theater in the area is because of the element it would attract. Think the Riverview, the now shuttered UA 69th Street, and the former UA Cheltenham 8. I would love to see the Boyd/ Sam Eric reopen. There has been talk of new movie houses before, the most recent, on 18th & Arch. The Ritz, the Ritz couldn’t get a theater to open on Walnut Street. Speaking of the Ritz, there are 12 screens the soon to be reopened Roxy with two more a grand total of 14 screens showing art films. Thirty years ago, I and a friend of mine, went to see Scarface, and we escaped with our lives, in 1990 Christmas Day, someone pulled a gun at The Godfather Part III. The days of general film exhibition in Center City are gone. Film at the Prince was a great experiment, I am grateful for seeing Seven Samurai, Wages of Fear, and “Spanish” Dracula on that big screen. I did go to the Sam Eric in it’s last years, after December 2000, it was too much, the rotting decay, the awful men’s room, the overzealous security kept me out of there. Howard Haas, is passionate about this theater, thank God for him, it pains him as it does me to see this theater still shuttered after 11 years. If this plan goes through, that will be the end of any possibility of seeing a 70mm film or restored movie palace. One of the posters is right, the Academy of Music is not a venue for plays and musicals, the Boyd would be a great mixed venue theater.

I agree this need to NOT happen.

Friends of the Boyd members fight a very noble cause. However, I have serious questions about the head of the organization. I’ve been interviewing people around issue and that experience raises many questions:

There are many more similar questions that deserve answers. People behind the effort to save the Boyd Theater are passionate people with good intentions. I’m concerned that, perhaps, they are not asking the most obvious questions because they assume everyone involved has the same motivations.