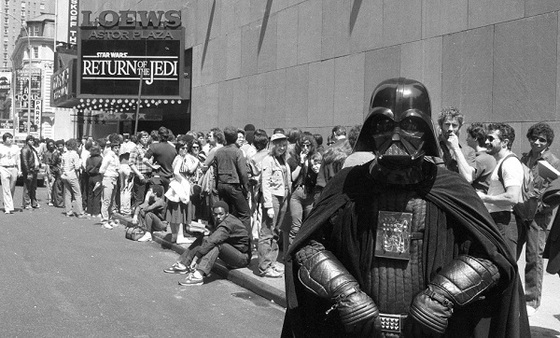 Longtime Cinema Treasures contributor, Michael Coate, has been writing some wonderful pieces for The Digital Bits lately that we thought would be of interest to readers. As 2013 winds down, here are some of the significant anniversaries from the past year.

RETURN OF THE JEDI (30th anniversary)

Chris Utley: I can wait for Michael Coate’s retrospective on the 40th Anniversary of THE EXORCIST on Digital Bits.

Not to mention THE STING on its 40th Anniversary too.

Coate also has put his retrospective on the 40th Anniversary of George Lucas' AMERICAN GRAFFITI which is already on the Digital Bits site!

And coming soon from Micheal Coate:

Yeah, I really want to read Coate’s retrospective on “The Exorcist”. I thought about doing one myself, but I’ve been too tied up helping my parents over this week.

Michael is the most thorough researcher I’ve ever seen. He works very very hard to make sure the information he prints is correct. He goes after details that many would ignore, such as what city a particular theatre might be located. Some are located in suburbs with names and boundaries that have changed over the years, and he looks long and hard to make the location correct. I enjoy his work and hope he continues with many more projects.

Great information, I would recommend it to my friends for them to check out. Thanks for sharing! If you have more time, please visit: paper io 2

I think this is an informative post and it is very beneficial and knowledgeable. Therefore, I would like to thank you for the endeavors that you have made in writing this article. All the content is absolutely well-researched. Thanks nytimes spellingbee

One of the conditions that many people face today is back acne. Back acne, although not life-threatening, makes people feel uncomfortable and self-conscious. Therefore, the use of therapeutic measures is extremely necessary. And one of the most effective back acne treatment products is https://meotrimunlung.com/sua-tam-tri-mun-lung-cho-nam-va-nu-hieu-qua-nhat/