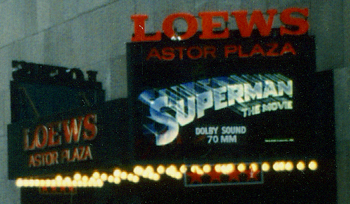 Here’s one more roundup of the meticulously researched anniversary pieces from Michael Coate over at The Digital Bits:

So glad this is on here. I would have missed the “Funny Girl” anniversary engagements. Why wasn’t it posted to Cinema Treasures like all the others?

i was around five years old when Die Hard first came out. That movie i would watch later on as the fourth die hard came out i watched all three die hard movies in order. The fourth one was good but the fifth one was bad. Will not see Die Hard 6. Never saw Funny Girl, saw bits and pieces of Cleo (thought it was boring), American Graffiti was good, I’ve seen every James Bond movie, Superman I love (on par with Man of Steel). 25 years ago this holiday season i saw Land Before Time, which is the first movie i can remember seeing at the theater (dad knows it was a reissue of Snow White in 1987). 10 years ago it was Return of the King.

At the Astor plaza …. Memory lane

I was around 13 years of age when the original “Superman” movie came out around Christmas of 1978. That movie I would watched again until “Superman II” came out in the summer of 1981. The first two “Superman” movies were excellent,but when it came to the third and fourth installments they were just horrible. Speaking of the 30th Anniversary of “The Return of the Jedi”,I saw that six times during the summer of 1983(the opening day with my high school pals)was just incredible!!! Speaking of the original “Die Hard” movie,I saw it in the theatres opening weekend during the summer of 1988 as well the two sequels in the theatres too. The first three “Die Hard” movies were excellent in their own right,but the fourth installment was half good,but the fifth “Die Hard” movie(set in Russia)wasn’t that half bad.

I’ve never seen “Funny Girl” until it was shown recently on Turner Classic Movies(in its original roadshow format that clocked at two and a quarter hours long),but when it came to “Cleopatra” I thought it was tediously long and totally boring(the running time was over four hours long). “American Graffiti” was excellent throughout.

Is the Cleopatra link broken? When I click on it Die Hard comes up.

Back in 1977, people from Philadelphia would travel to the Astor Plaza to see STAR WARS in 70mm and Dolby. First movie I saw there was John Ritter in Hero at Large the next, THE EMPIRE STRIKES BACK. Later the first three Indiana Jones movies, said goodby with SPIDER MAN2

I saw “American Graffiti” 41 years ago, when it first came out, and liked it a great deal. I’ve also seen a number of the James Bond movies, which were also very cool. It’s good to see the great older films re-emerge.