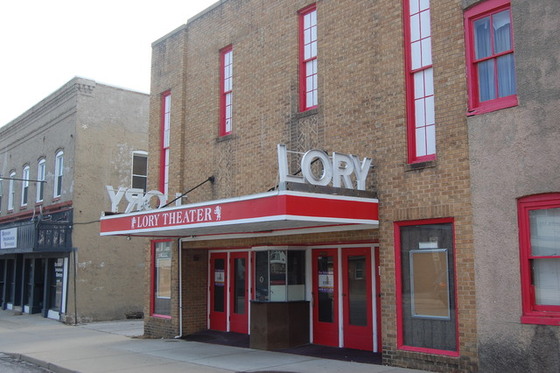 HIGHLAND, IL — When Justin McLaughlin bought the Lory Theatre, he had no idea how much work it would take to bring the theatre up to today’s standards. He did extensive renovations but did not have enough for a new projector. He’s now launched a kickstarter campaign to raise $50,000 for a new projector from Christie.

I would love to offer two things …

First of all, some updated photos! The Lory has had quite the face lift since being purchased by Justin & Hillary McLaughlin and re-opened.

Secondly, a correction to your statement about not having enough for a new projector. The Lory has two screens. The larger auditorium is on the 1st floor and they already purchased a state-of-the-art digital projector for that main theater! The Kickstarter is to fund the purchase of a digital projector for upstairs where the 2nd floor balcony was converted several decades ago into an additional smaller capacity auditorium. It is true that extensive renovation costs threw a wrench into the plans, but the movies shown since their re-opening on December 26, 2012 are all on a fantastic screen, with a fantastic projector, accompanied by fantastic sound!

The Fox 2 news story tries to cram so much into a tiny spot that you can almost miss the image of Justin with the interface screen working the computer of their new digital projector.

The community is rallying around the Kickstarter in very creative ways. Please stay tuned to this unfolding story and thanks for the mention!

I love this Theater! I have so many memories going to it as a kid and it really was a staple to the small community. I was thrilled to learn that someone had bought it and was renovating it. I no longer live in Highland but look forward to the day I return to town – you can bet I’ll go see a show at The Lory. I hope people keep it alive – support the Kickstarter campaign!