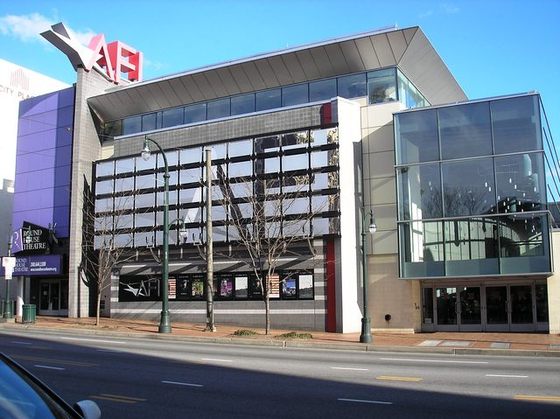 The AFI Silver Theatre and Cultural Center is featuring “70mm Spectacular, Part 2” between July 4–September 2. As their website notes, “There’s nothing like seeing large-format films on the big screen, and this summer, AFI Silver delves deep into the history of 70mm filmmaking. … Surviving 70mm prints are extremely rare; theaters equipped to project 70mm films are even rarer. This summer’s edition is a follow-up to 2012’s very popular series; 70mm prints will be presented wherever possible along with several stunning new restorations on the Silver’s new Digital Cinema Package (DCP) system.”

(Thanks to JackCoursey for the photo.)

Is there a list out there of what 70mm prints survive?

Note that about half of these presentations aren’t even on 70mm film, digital (DCP) instead. Of course they were originally shot on 65mm a and printed on 70mm but does DCP look as good as 70mm? Does this theatre have 4K projection? Wish I didn’t live across the country so I could find out for myself! REAL 70mm. film presentations seem to be almost as endangered as 35mm presentations though. Will there be any at all in a few years? I sort of doubt it!

yes, the theater does have 4K digital projection.

what’s very unfortunate, well in not only that 65mm still yields the highest resolution over “4K digital”, is that the five front channel soundmixes (prior to 1979 70mm 6-track: three front, two surrounds, plus bass) aren’t retained as such in DCP form – until studios start archiving the sound elements properly in DCP form (which does account and accommodate left/center and right/center channels), 70mm films/mag sound will always be superior.

This year, I saw the 4k restored Lawrence of Arabia at the Ambler Theatre and the digital restoration of Cleopatra at UA King of Prussia. Lawrence was shown with surround sound. Cleopatra wasn’t. Both had gorgeous colors & looked stunning. Neither looked like 70mm resolution. There’s a restored 70mm Cleopatra & I was hoping the AFI Silver would show that.

speaking of ‘Lawrence’ it is rather interesting that the AFI will be showing it in 70mm and the 4K DCP – while the 4K has discrete surround, the original mix is five front channel + mono surrounds. Very strange that ‘Cleopatra’ didn’t have surround sound, since the bluray does. I didn’t bother seeing the restored ‘Cleopatra’ over at Landmark Bethesda since they screened it on the small screen (auditorium #1) – I might check it out here though.

At UA King of Prussia, Cleopatra was shown in auditorium # 4, which has 200 seats and that size among the 2nd smallest auditoriums there in seat capacity but for scope has about 40 foot wide screen, quite large. I did the best that I could to actually measure it by pacing in front of it. Cleopatra was shown in proper 2.20 ratio. The blu ray has 5.1 Dolby Digital surround. I’d like to experience the movie in surround. Regardless, seeing the entirely restored 4 hour Cleopatra was fantastic! I had only previously seen the 3 hour version, in an old print. My understanding is the 4 hour version was roadshowed in NYC & LA but most Americans elsewhere only got to see the 3 hour version. The original filming was 6 hours meant by the director for 2 separate movie releases but Fox insisted on releasing only one 4 hour movie (which was then cut down, as said).

yes, check out the documentary ‘Cleopatra: The Film That Changed Hollywood’ on the bluray which talks about the scissoring of the film and most notably features a pivotal scene that isn’t in either the cut down 3 hour cut AND the roadshow version.