‘The Shining’ - Movie and Masquerade at Loew’s Jersey Theatre 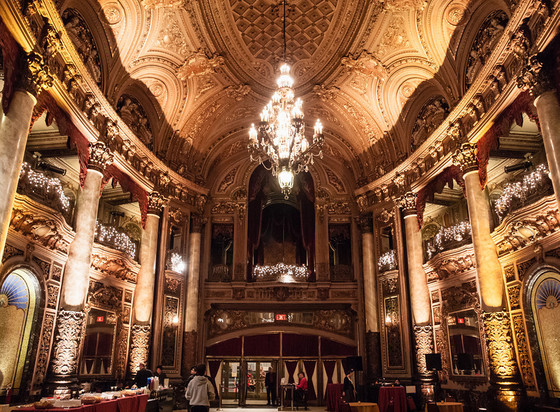 The Movie AND a Masquerade After-Party

That’s also a Benefit for Friends of the Loew’s

Halloween fun will last one day longer at the Loew’s Jersey this year thanks to Jack and friends from the Overlook Hotel, and will also help raise funds for Friends of the Loew’s …

On November 1 at 7PM the legendarily creepy “The Shining” starring Jack Nicholson will be shown on The Loew’s Jersey’s BIG 50ft WIDE screen.

After the movie, starting at 9:30PM, patrons will step out to the Grand Lobby and into an elegantly decadent Masquerade After-Party!

It’ll have a 1920s theme to celebrate the Loew’s 85th Anniversary. And the ‘20s theme will also make party-goers feel like they’re back in one certain scene in “The Shining” — a little eerie, maybe, but also a lot of fun!

There’ll be a great mix of music & dancing all night, light refreshments, a cash bar (wine & beer) and a surprise or two.

And because a Masquerade has become a new tradition at the Loew’s, they’ll be a Costume Contest for fun prizes with categories that include “Best Jack”, “Best Movie Star” and “Best Over-All”.

But patrons don’t have to wear a mask. Costumes are preferred, not required, so party-goers can come as they are, if they want.

“THE SHiNiNG” Nite is being presented as a benefit for Friends of the Loew’s, Inc. To help support our work of operating, restoring and maintaining the Landmark Loew’s Jersey as a non-profit arts center to serve our community and region.

Advance tickets are just $25, and include one free drink! You can get them now at http://shining-nite-loews.eventbrite.com/.

And for anyone who can’t attend the party but still wants to see the movie, admission for the screening of “The Shining” only will be $8.

The Loew’s is wheelchair accessible. The Loew’s Jersey is managed by Friends of the Loew’s, Inc. as a non-profit, multi-discipline performing arts center.

“The Shining” Nite is presented by Friends of the Loew’s, Inc.

(Thanks to Dave Vanderheyden for providing the photo.)