“Inside the Total Transformation at Downtown’s Regent Theater” From Los Angeles, CA. 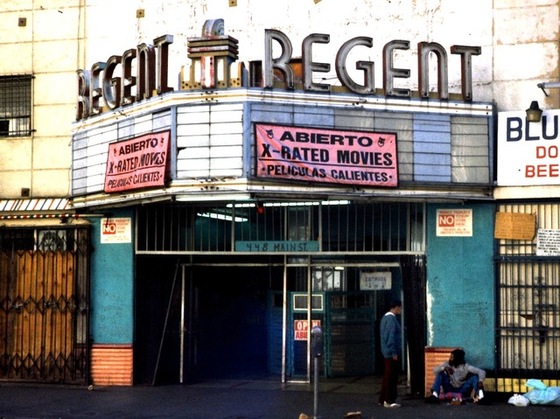 When the Regent Theater reopened early last month on Main Street in the Historic Core, completely revamped and ready for business as a live music venue, it was a big deal for the area: the Regent is the last historic movie palace left on Main Street; the Merced over by Olvera Street is the only other old theater left on Main at all. (The Merced was a live theater; it’s scheduled to become a city TV station by 2017.) Despite having hosted occasional special events in recent years, renovation photos of the Regent’s interior, provided by New Theme, the firm that oversaw the adaptive reuse project, show just how much the place was crumbling and underscore the impressive improvements made to the 100-year-old building. Now that it’s fixed up, the Regent is run by the same guy who operates Echo Park’s The Echo, and has a hip bar and restaurant inside, plus a fancy new sound system for its live acts.

Image of the Regent, circa 1980, uploaded by CT member, JohnRice.

Article by Bianca Barragan for La.curbed.com