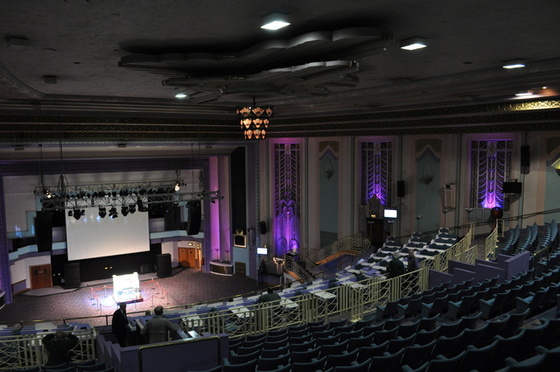 Secret Cinema has revealed that it showed Charlie Chaplin’s The Great Dictator at a one-off secret screening on Sunday to protest against ‘the attack on freedom of expression’ represented by the Sony hacking.

Staged on Sunday at simultaneous events in London, New York, San Francisco and Rome, the 1940 film portrays fictitious dictator Adenoid Hynkel, a thinly-veiled version of Hitler. In London the movie was shown at the Troxy Cinema, while an additional event in Los Angeles screened The Red Chapel.

Over 2,000 people attended from across the five cities and at least £11,500 of the total proceeds will go to global free speech charity Article 19.

Not to take away from this story but Cinema Treasures only coverage on this story is this ??? The biggest movie story in decades .

They know firsthand about the my essay writer requirements for these texts. Therefore, the essays and essays ordered from us are really high quality.

Read from here all about “Secret Cinema reveals it showed The Great Dictator at protest secret screening, following Sony’s The Interview cancellation” or you can try to go for other links online as well. We hope that the assignment writing service UK is good enough as there are many kids who like it for good reasons.

Hello there guys! I want to say that searching for good hoting provider nowadays is really hard question, it is similar for searching good service for helping students. Im studying now in Boston college, and from time to time i use help of writers and do my homework cheap. They are real professionals, just check reviews!

As there is an image and the heading that tells Secret Cinema tells it showed The Great Dictator at protest secret screening, that leads to Sony’s The Interview that got cancelled, so we this this will provide you with a bit know-how what this is all about. Just check this out and let others know as this site is the best one that you would like to know about because it is good enough.

It’s the best story in decades, it will cover all media after its release. But if you’re in search of an apartment I have a guide for you: https://www.onyamagazine.com/australian-affairs/how-to-write-a-reference-letter-for-an-apartment/