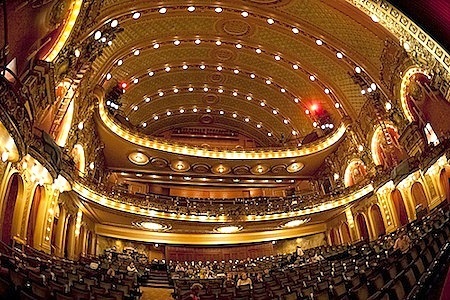 Michael Coate has written another great piece over at the Digital Bits for the 45th Anniversary of “Sweet Charity.” He provides a detailed account of all its roadshow engagements as well as an interview with a number of film historians on that almost forgotten distribution format.

Check out the whole story at the Digital Bits.

(Thanks to Tinseltoes for providing the photo of the Cutler Majestic(nee Saxon) in Boston, host of the World Premiere of “Sweet Charity”.)

I suppose no chance of a release of this movie via fathom events. They never did for Funny Girl last year either. Unfortunately Charity was basically a commercial flop.

i saw sweet charity on Encore in a restored version that was remixed in Dolby Surround sound.

The soundtrack on the last DVD release is horrible moviebuff 82

“Sweet Charity”(1969) was one of two movie musicals that Universal put out during the 1960’s that was presented in its original roadshow format. The other two movie musicals were “Flower Drum Song”(1961),and “Thoroughly Modern Millie”(1967),both were released by Universal Pictures. These movies were reserved seat engagements with reduced admission.

While “Flower Drum Song” was a boxoffice smash during its theatrical run the other two movie musicals like “Thoroughly Modern Millie” and “Sweet Charity” were not as successful even though they had big musical productions and Hollywood star power. In the case of “Thoroughly Modern Millie” it had the star studded casting of Julie Andrews(fresh off the phenomenon hit that was “The Sound of Music”),Stockard Channing and Mary Tyler Moore. “Sweet Charity” also a musical had the star power of Shirley MacLaine, Ricardo Montalban,and Sammy Davis, Jr. with the direction of Bob Fosse that was impressive but was not a commercial success upon its theatrical run. It was a huge theatrical flop. A big disappointment for Universal.

BTW: “Sweet Charity” was shown recently…… Not only Encore showed its restored version that was remixed in Dobly Surround Sound,but Turner Classic Movies shows this film from time to time in its original roadshow format complete with entrance and overture introduction, intermission,and exit music.

They also recently did the same thing for “Thoroughly Modern Millie” that was shown on both Encore and Turner Classic Movies.

See the digital bits website for the retrospective article on the 45th Anniversary of “Funny Girl”.

i saw Thoroughly Modern Millie during its reserved seat engagement at the Criterion Theater on 44 St.. but i was not aware Flower Drum Song which is one of my favorite musicals opened on a reserved seat run.

I saw Thoroughly Modern Millie during one of its re-releases in 1970 at Durham’s Northgate Theatre. And the last time I saw it was on television. It had its only reserved seat engagement run in the Carolinas at Charlotte’s Capri Theater in September of 1967. Flower Drum Song opened as a reserved seat engagement in larger cities like New York and Los Angeles. Here in the Carolinas,it opened as a general release.

Flower Drum Song was a continuous run release — everywhere. It was the Thanksgiving show at Radio City Music Hall and,although the 944 first mezzanine seats were reserved, that was standard policy for the theatre through its entire history. In LA it played the Warner in Hollywood, after $250,000 had been spent to remove — permanently it was thought at the time — Cinerama (after almost eight and one-half years). It was the second of three pictures that played continuous-run between Oct 61 and June 62. After that wrong business decisiom $300,000 now had to be spent to reinstall Cinerama for Brothers Grimm.

I don’t ever remember Flower Drum Song being a Roadshow here in Boston or anywhere else.

Raise awareness of isolation and self-isolation when returning from epidemic areas to limit the spread of covid-19 to the community. mapquest driving directions

A good website, I am happy to find useful information from you. I will keep looking for interesting things about your post. surviv io

Thank you for sharing this! home cleaning service syracuse ny