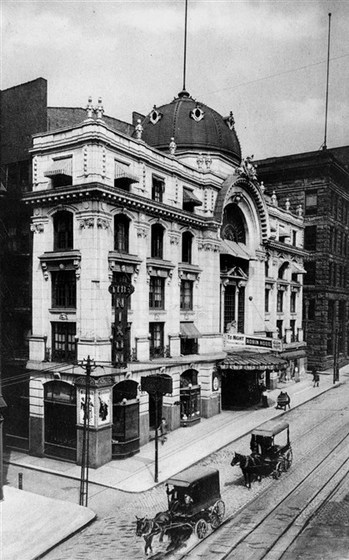 “April 1950 holds special memories for me. I watched the legendary Mae West perform at the Nixon Theatre Downtown in “Diamond Lil.” More significantly, it marked the end of that grand and beautiful theater at the corner of Sixth Avenue and William Penn Place.

When the curtain came down on the final performance of “Diamond Lil” on April 30, one of the city’s finest playhouses closed its doors for good. The site had been sold to the Aluminum Company of America to make way for construction of Alcoa’s corporate headquarters.

Then a college student, I ushered at the Nixon on evenings and weekends. It was my first extended exposure to live stage shows and marked the beginning of a love of the theater that remains strong to this day.

What a showplace the Nixon was! It had been described as “the world’s most perfect playhouse,” in a building crowned by a large dome. For 47 years after its grand opening in 1903, it was arguably the city’s premier venue for performances of Broadway’s top musicals and dramas and major attractions such as the Ziegfeld Follies and Metropolitan Opera.

Its stage was graced by the likes of Ethel Barrymore, Rex Harrison, Al Jolson and Katharine Hepburn. For one of its most elaborate productions, a 1905 staging of “Ben Hur,” 20 horses took part in the famous chariot race and several camels and their drivers appeared onstage.

The Nixon also afforded an intriguing source of adventure for impressionable ushers like me and my colleagues. Many nights after the curtain went up, one or two of us would head for the unlocked door at the top of “peanut heaven” and step out onto the roof. We’d cross it and enter another unlocked door.

Back inside, from a catwalk circling the theater, we had a bird’s-eye view of the mammoth stage and the five tiers of dressing rooms below us. It was an awesome sight to see the hustle and bustle of performers as they came onstage or exited during a rousing song-and-dance number, or we would be mesmerized listening to the words of a gifted playwright.“ – Vincent DiRicco