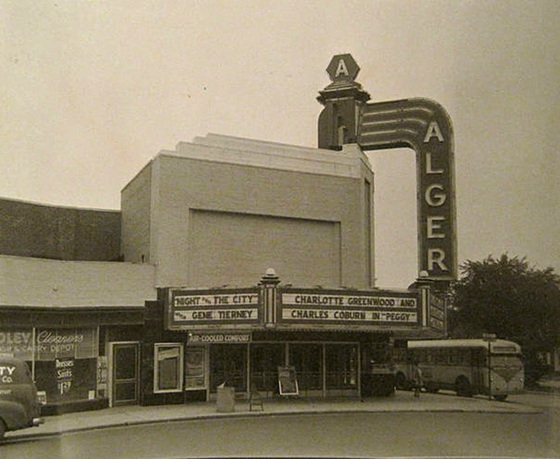 Are you in Detroit this weekend? For the first time in 30 years, Detroit’s Alger Theater is planning to screen a film in the historic Art Deco movie house that opened in 1935 at the corner of East Warren and East Outer Drive.

As part of its new Brew & View fundraiser series, the Friends of the Alger Theater will show Mel Brooks' 1974 comedy Young Frankenstein Sunday afternoon at 5:30 p.m. The choice of Young Frankenstein, Broughton says, “is a bit of a spoof on our history,” a nod to the Alger’s last days in the mid-1980s when it was known as a “blood-and-gore” joint. Its last hurrah was a double feature of Friday the 13th flicks (parts IV and V) in 1985. This screening was the first of four planned at the Alger this summer, scheduled to take place on the second Sunday of the month from June through September.

Located on the city’s far east side in the Morningside neighborhood, the 825-seat Alger is finally ready to open its doors for its first movie since 1985.

It’s been a long time coming for the Friends of the Alger, which under the leadership of Geoff Gowman, purchased the building back in 1986.

Board president Helen Broughton could not be more excited.

“We have an electrician who’s been doing some work for us,” she says, “and he just got the lights on the sides of the seats in the aisles to light up. We were like, ‘Oh, my god, the lights are on!’”

The theater’s renovation, which is still a work in progress, recently got a major boost from the Lear Corporation, and Broughton is eager to show off their hard work.

“Lear is stepping up and giving us so much to be prepared for this event,” she says. “They’re helping us clear away years of dust. They’ve got all their volunteers coming in and pumping the water out of our basement, cleaning all the seats … helping with the electrical work, and they’re paying for the projection for this film, too. It’s just amazing the amount of work they’re doing.”

Read on – and let us know if you attend a screening! http://www.metrotimes.com/Blogs/archives/2015/06/13/detroits-historic-alger-theater-to-screen-its-first-movie-in-nearly-30-years

Image of the Alger by Dave Wodeyla via Cinema Treasures