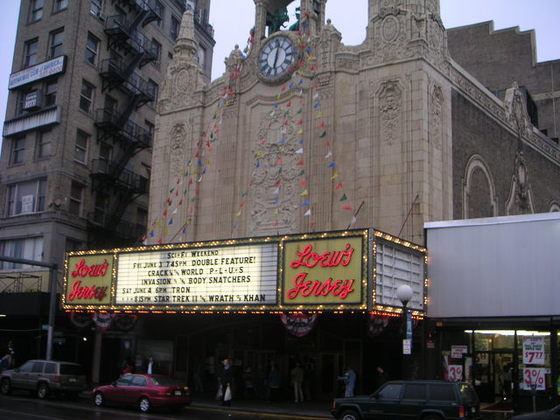 Here’s a great perspective on the latest news from the Loews Jersey City thanks to Stephen Whitty: “Well, it looks like we’re going to have movies at the Loew’s Jersey City a little while longer. The city, which has been trying to evict the non-profit group that has been restoring, programming and managing the theater, lost that lawsuit today. The judge, it seemed — imagine this — ruled that a contract was a contract and the Friends of the Loew’s could stay…

The Friends had saved the city-owned theater from destruction and have been painstakingly restoring it — mostly through volunteer labor, donated materials and small grants. The city wanted to bring in a major promoter instead and, after some lavish renovations, basically reopen the space as a concert hall.

You can read that new story here. (And enjoy a great series of images showcasing the Loews interior)http://www.nj.com/hudson/index.ssf/2015/05/jersey_city_loses_bid_to_kick_out_nonprofit_group.html

As you can tell, I am not impartial in this. Actually, I think that this small band of movie lovers would go up against Jersey City and win is like something out of a Frank Capra movie. And, not surprisingly, the city’s response to the decision could have been snarled by a Lionel Barrymore villain.

The judge’s ruling, said a city spokesperson, “guarantees the theater will sit as is with only sporadic silent movies, even less frequent concerts, no air conditioning and no ability of the group to complete the restoration. It is upsetting because the most important thing to the FOL was protecting their own personal salaries and fiefdom, despite the fact they can’t complete the repairs after 25 years.”

This is, at best, astounding nonsense.

The fact is that the theater has never shown “only sporadic silent movies” but a full menu of films — along with hosting concerts, drama festivals, and community and private events, all at affordable prices. (Were you there for last year’s “The Shining” Halloween costume party? You should have been.)

It’s true that there is no air-conditioning and that the restoration isn’t complete — plenty of promised funding never arrived, and the FOL has had to rely largely on donations and volunteer labor. It’s not true, as is implied, that anyone is getting rich off this — I’ve read the Friends' tax returns, and according to the last one I saw they had exactly two full-time, not very well-paid, staffers.

The theater does need help and — as the Friends themselves agree, more concert acts can be part of that programming. Anything that brings more life and energy to Journal Square, and more money into the Loew’s box office, is welcome.

But we don’t need to see the Loew’s turned into just one more overpriced, local concert hall booking nothing but the same second-rate acts. We do need one — at least, please, one — picture palace where movie lovers can see films the way they were meant to be shown and local residents and arts groups can have a say in the programming.

This isn’t necessarily a happy ending, because it’s not an ending — even after today’s decision, the Friends' current contract runs only another five years. But for the Friends — and their friends, of which I am obviously and unabashedly one — it is a very welcome intermission."

Theatre Historical Society of AMerica
Learn more about theatres on our website at www.historictheatres.org 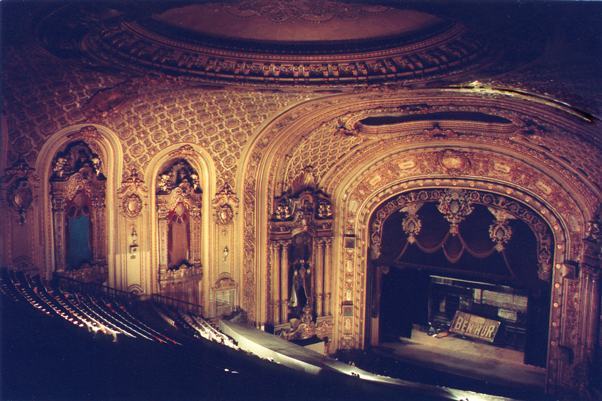 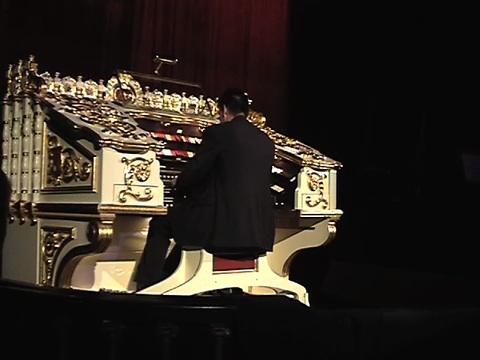 It would be a shame to see this grand-looking theatre either go the way of movie theatre heaven or to be restored as an over-priced concert hall.

BTW, anyone who hasn’t yet visited the Loews and walked through its magnificent spaces is really missing something.

I would like to know the name of the spokesperson who questions the motives of the paid staff of the Loew’s while earning their salary off the taxpayers as a government flunkey who is so ill informed that at best they are repeating the party line and at worst questioning the ethics of individuals who with great dedication have fought for many years to save this jewel in the New Jersey crown.

This is a person who knows nothing of their struggles and achievements yet with the typical hot air of one who claims authority while knowing little of their subject speaks only for those who wish to exploit the efforts of so many years of the Friends of the Loew’s for personal financial gain. This same individual 25 years ago would have happily witnessed the destruction of this great building crowing eagerly about what a great boon to the economy a large, ugly, soulless office building would be.

“Instead of the possibility of daily events with global talent coming to Jersey City, this instead guarantees the theater will sit as is with only sporadic silent movies, even less frequent concerts, no air conditioning and no ability of the group to complete the restoration,” Morrill said. “It is upsetting because the most important thing to the FOL was protecting their own personal salaries and fiefdom, despite the fact they can’t complete the repairs after 25 years.”

Her lack of knowledge(to put it very very kindly indeed) about what the Friends of the Loew’s has meant to Jersey City and her ugly swipe concerning those running it is appalling.

This woman owes a big apology to those who have a commitment to this city and this theater which is beyond her comprehension. The fact that she would accuse anyone else of protecting their own salary is beyond rich.

I really don’t understand why the two can’t coexist. Both bring something to the table. And anyway, it seems like these places are never booked as much as officials promised after the restoration is complete. So it is likely there would be plenty of time for silent movies and community events.

One would like this to be the case but after the government swoops in to take advantage of literally decades of the Friends of the Loew’s struggles and work(I’ve been going there since they could only show movies in the lobby) as soon as we see them in league with the big music promoters I think we can say goodbye to reasonably priced classic films. It would simply cost too much money to open the theater after such an expensive renovation for such little revenue. Those who have dedicated so much time to the theater will be left out in the cold(I hope I have to eat those words.)

Look at Radio City, Loew’s Paradise and the Kings. Do any of these show films at what once was called popular prices? Do they show silents with an organ? I’m not aware of it if they do. Maybe someone has more knowledge of this than I do.

I just find it so ironic that people like Ms Morrill who view the world through green colored glasses talk about being concerned with benefiting the people of Jersey when all she sees is a cash cow. As other cities renovate theaters for over priced concerts that locals can’t even afford Jersey City politicos are chomping at the bit. They can’t even wait 5 lousy years! That says it all.

As I said before if she and people of her kind had the say so years ago the Loew’s would have become nothing but rubble.

My question is: how many venues can you have? They just finished renovating the Kings, now they are talking about renovating the Brooklyn Paramount, and they did a great job on the Paradise only to decide after a few years that it was more lucrative leasing it to Creflo Dollar.

If they do spend top dollar on a renovation I just hope the Jersey doesn’t end up being a millstone.

Imho, the more movie venues that’s available, the more choices in movies that people have to choose from. The fact that so many movie venues have gone the way of movie theatre heaven is unfortunate, because it severely restricts the kind(s) of movies that’re available for people to choose to go and see.