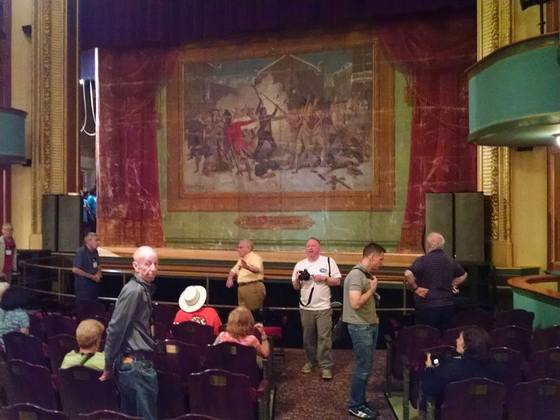 Another busy day in Virginia! Today we visited the Norfolk area and the Attucks Theatre, Chrysler Hall, Roper Performing Arts Center, and the Wells Theatre.

Attucks Theatre: The architect for the Attucks Theatre was Harvey N. Johnson (1892-1373). Born in Richmond’s Jackson Ward, the son of a successful carpenter, Johnson was educated at Virginia Union University in Richmond and the Carnegie Institute of Technology in Pittsburgh. In 1919 at the age of 26, he moved to Norfolk to design and supervise the building of the Attucks theatre.The extant plans of the theatre are signed by Johnson and Charles T. Russell, another Black architect who designed the renovation for the St. Luke Building in Richmond, as well as supervised the additions to the buildings of Virginia Union University.

Chrysler Hall: Built in 1972, Chrysler Hall is part of the Norfolk Scope, an entertainment complex consisting of an 11,000 person arena, a 10,000 square foot exhibition hall, and the 2,500 person Chrysler Hall. Chrysler Hall was always imagined as being part of this amazing Norfolk cultural center. Norfolk architects Brad Tazewell and Jim Williams were inspired by the 1960 Rome Summer Olympics’ Palazzo and Palazzetto dello Sport, and made a plea to Senator A. Willis Robertson to build a similar sports complex in Norfolk. When Senator Robertson was later asked by President Lyndon B. Johnson to support federal funding for a cultural and entertainment complex in Colorado, Robertson took up Tazwell and Williams’ idea, and said he would support a cultural complex in Colorado if President Johnson would support one in Norfolk. Williams and Tazwell were commissioned as designers, and they in turn commissioned Pier Luigi Nervi, the Italian architect who designed the Olympic structures they had earlier admired. Chrysler Hall has been Norfolk’s cultural center since its earliest days, currently hosting over 140 events a year and welcoming over 150,000 attendees annually. The Virginia Symphony Orchestra, Norfolk Form, Virginia Arts Festival, and the Virginia Ballet all call Chrysler Hall home.

Roper Performing Arts Center: The Tidewater Community College Jeanne and George Roper Performing Arts Center was originally built in the early 1900s, not as a theatre but rather as Gilmer’s Department Store. For much of the 1910s and 1920s, the building served as the Philip Levy Furniture Stores, but in 1924 the building was purchased by Loew’s. Loew’s brought in architect Thomas Lamb and local interior designer Anne Dorrin to shape the department store into a world class theatre, at an estimated cost of just under $1,000,000. The Loew’s State, as it was called, opened on May 10th, 1926 with a program that included films, organlogues, and vaudeville acts. The theatre remained open as a movie theatre until 1978, although in the later years the quality of entertainment shifted to X-rated films and b-grade materials. It was briefly reopened as the Premiere theatre in the early 1980s, when new management attempted to make it a live performance venue for jazz and rock acts, but by 1984 they too shut the doors. As the downtown area underwent urban renewal attempts, the theatre’s marquee was removed and retail spaces were built along the building’s front. The building was eventually purchased by Tidewater Community College, in partnership with the city of Norfolk, and renovations began in 1999. Though a leaking roof had caused a great deal of damage, much of the auditorium was intact, with restorations done to the ceilings, chandeliers, theatre boxes, murals, leaded glass windows, and original auditorium seating. The rear section of the building was most affected by the water damage, leading that area to be converted into lecture halls and classrooms. The restoration process led to the rediscovery of many artifacts from the theatre’s heyday, including hand-painted film posters from 1929, set pieces from the Loew’s vaudeville circuit, and several programs from the early 1930s.

Wells Theatre: he Wells theatre is named after Jake Wells, a major figure in late 19th century Virginia theatre. Wells began his career as a professional baseball player, was struck one day by an idea and stated to a friend “I believe there is money waiting for the man who gets hold of that building and puts on the right kind of popular-priced vaudeville.” That building would become the Bijou Family Theatre, Richmond’s first vaudeville house. Wells and his brother would go on to manage and own- over 42 theatres throughout the South, including the namesake Beaux- Arts Wells Theatre, opened in 1912. In 1979, the Virginia Stage Company took control of the theatre and, after using money from its own pockets to pay back the deficit, began the fundraising process to fully restore the theatre to its previous glory. Under the guidance of architect John Paul Hanbury, the restoration brought beauty back to the Wells. When the Virginia Stage Company moved in, the theatre was marred by a leaking roof which damaged the statutes, murals, stained glass, brass rails, and Tiffany lamps which had been painted over, then left to flake. A 3.85 million dollar renovation in the late 1980s included work on the outer vestibule and house, with work on the plasterwork and ceiling murals. While the restoration updated many aspects of the theatre to 20th century standards, the Wells uniquely retained its traditional rope rigging system. One of the few American theatres still existing as a “hemp house,” the Wells makes use of the traditional complex system of ropes, pins, pulleys and sandbags to lower scenery and props onto the stage.

The Attucks, Chrysler Hall, and the Wells Theatre are part of Norfolk’s SEVENVENUES program. For more information about the theatres visit their website at http://www.sevenvenues.com/venues/all

For more information about the Roper Performing Arts Center you can visit their website here: http://www.tccropercenter.org/

ABOUT THS: Founded by Ben Hall in 1969, the Theatre Historical Society of America (THS) celebrates, documents and promotes the architectural, cultural and social relevance of America’s historic theatres. Through its preservation of the collections in the American Theatre Architecture Archive, its signature publication Marquee™ and Conclave Theatre Tour, THS increases awareness, appreciation and scholarly study of America’s theatres. Learn more about historic theatres on our website at www.historictheatres.org 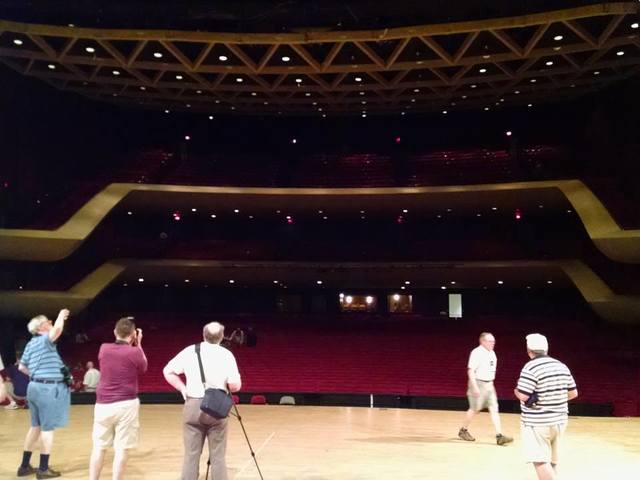 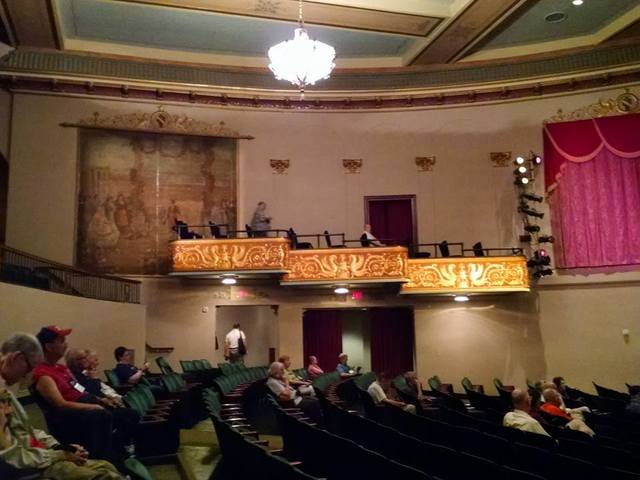 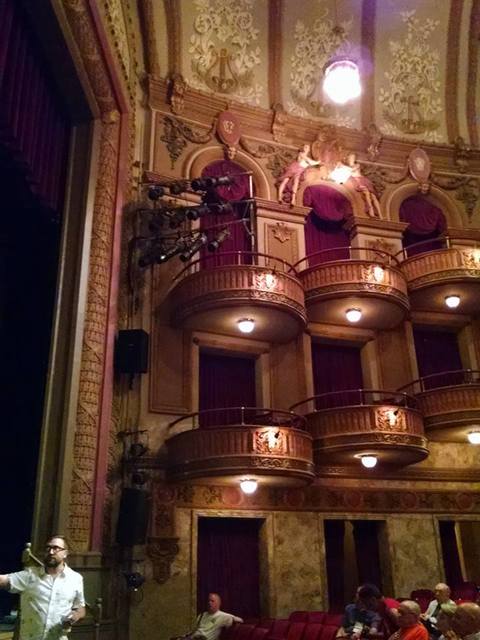 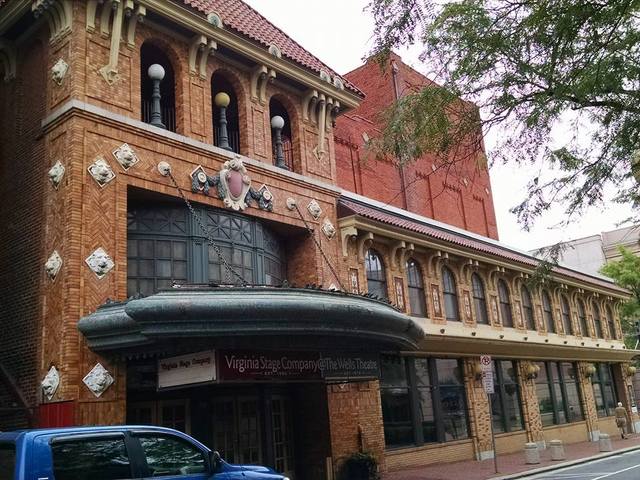 Ornate exterior on this beautiful building. Marquee ie perfect for this design too.