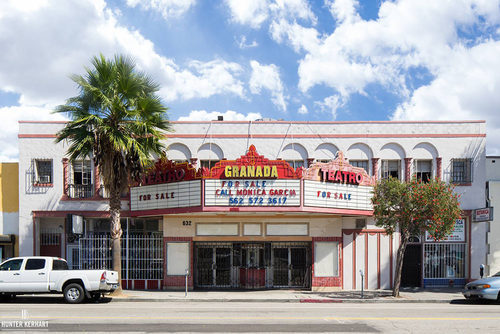 San Pedro’s fabulous and historic Warner Grand Theatre has undergone significant renovations and updates, screens movies, and hosts special events, but not too far away, the similarly handsome Granada Theatre in Wilmington, CA has not had the same good fortune. Yet…

A group called Wilmington Granada Friends has recently mobilized to try and raise money to revitalize the neglected but not totally trashed structure, and turn it into an “epicenter of arts, entertainment and community-based services,” the Daily Breeze says.

The Granada was built in 1926 by CW Post, whose fortune came from cereal (his company is now Post Foods), as a venue for live Vaudeville acts. When Vaudeville’s time passed, the theater became a movie house. In 1937, it was purchased by Twentieth Century Fox and its Spanish-style interior was given the full-blown Art Deco makeover that the theater sports today.

After the movie theater stopped screening films, it sat vacant for a while, save for the homeless cats that moved in. In the late ‘90s, a “Spanish-language playhouse” kicked the cats out; when they moved on, a church offering services in Spanish took up residence inside.

The theater went up for sale last October, asking $1.495 million, though the LoopNet listing now advertises $1.399 million. The theater isn’t a total wreck and has been used recently to host community events. The LoopNet copy calls the Granada a “well-maintained” theater and notes that it’s had the same owner for “over half a century.”

The Wilmington Granada Friends are shooting to raise $20,000 for restoration work on the 89-year-old theater, though their fundraiser, initially planned for this weekend, appears to have been postponed, according to postings on their Facebook page and official site.

Follow this link to read the article by Bianca Barragan in Curbed LA: http://la.curbed.com/archives/2015/07/wilmington_granada_theatre_restoration.php

All photos by Hunter Kerhart 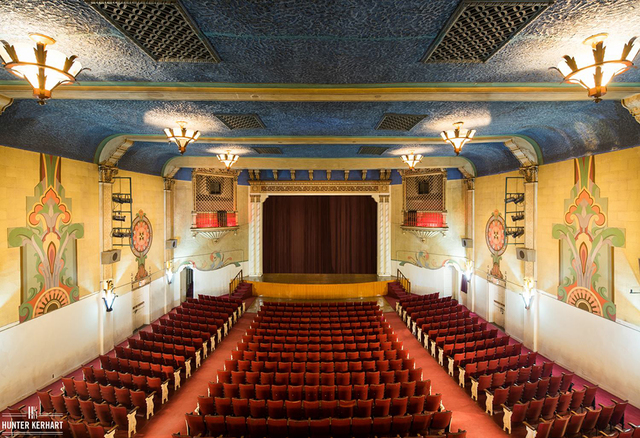 Wow! What a funky and fun art deco spanish inspired interior. Worth saving. Lighting is wonderful and murals too.

The chandeliers are clearly from a Skouras-era remodeling, as well as the painted decorations. However, the painted patterns exhibit a color palette and pattern which suggest to me that they are the work of the same designer who repainted the ceiling of the Fox Westwood Village. Theatre Historical Society has tentative plans to visit Los Angeles again in a couple of years, including seeing places not visited before. Here’s hoping this theatre will be included.