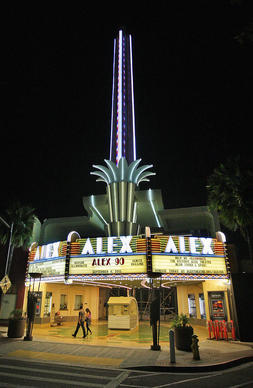 “Visitors got a sneak peek at the restored beacon of downtown Glendale – the highly visible tower with a spire atop at the Alex Theatre as it was briefly relit about a week ahead of the historic venue’s 90th birthday.

Redoing the 100-foot-tall neon tower was the latest in a series of restoration efforts over the past several years. “The tower and the spire itself have been kind of falling apart for the last three years,” said Elissa Glickman, chief executive of Glendale Arts, the nonprofit that manages the theater.

In addition to the neon, there are sequential chase lights that light up vertically along the tower. Those lights were previously incandescent bulbs, which burnt out quickly, she said. LED ones are used now and last longer. “LED has a life span of five to 10 years, not to mention the energy-efficient component,” Glickman said. Four years ago, the marquee and the Alex sign were redone. Last year, a $5-million face lift added expanded dressing rooms. The renovations wrapped up ahead of the Alex’s 90th anniversary of when it first opened its doors on Sept. 4, 1925.

The Alexander Theatre opened as a Vaudeville house and movie palace on 4 September 1925. From the 1920’s through the 1950’s, the theatre served as a preview house for major Hollywood studio films, drawing the most glamorous stars of its day including Elizabeth Taylor, Charlie Chaplin, Bing Crosby, and Barbara Stanwyck. In 1940, the iconic marquee and 100 foot-tall Art Deco neon tower with chasing colored lights and sparkling sphere were added to the exterior. The Theatre’s name was officially shortened to “Alex”.

The Glendale Redevelopment Agency purchased the Alex Theatre to serve as the centerpiece of Glendale’s revitalized Brand Boulevard and embarked on a $6.5 million rehabilitation of the facility in 1992.

On New Year’s Eve 1993, the Alex Theatre opened as a 1,413-seat performing arts and entertainment center. The new facility included a stage expansion and new seating layouts, theatrical systems, and screen. It welcomes approximately 100,000 patrons each year and has been on the National Register of Historic Places since 1996. In May 2014, following an eleven month expansion project, the Alex opened with upgraded amenities like additional dressing rooms, storage and shop space, the installation of a new freight elevator for access to street and subterranean levels, a new passenger elevator, and additional stair and hallway access to assist with loading.

Read more about the restored tower lighting in the Glendale News-Press. http://www.glendalenewspress.com/news/tn-gnp-historic-alex-theatre-flashes-a-glimmer-of-restored-tower-lighting-20150827,0,4181640.story

Click here to enjoy a slide show about the Alex, its history and renovation. http://www.alextheatre.org/about/history 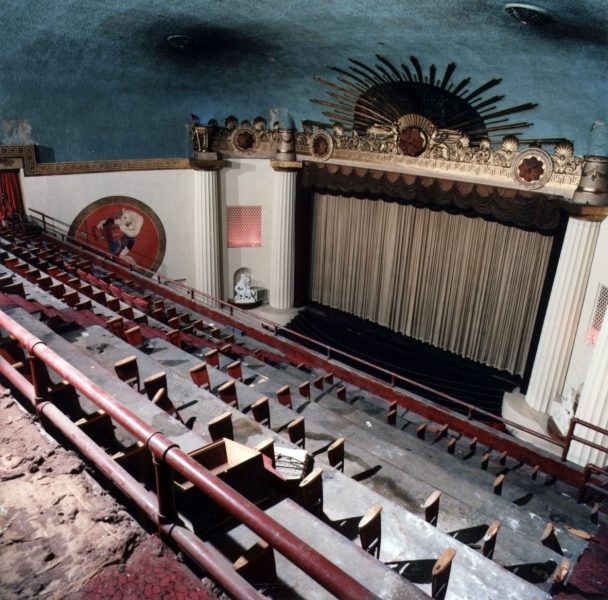 Great marquee and sign and exterior. Proscenium is nice too and gilt and details.