Subscribe to this blog
posted by ThrHistoricalSociety on September 24, 2015 at 10:54 am 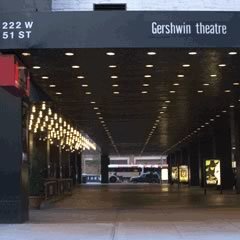 Inductees will be honored on Monday, Nov. 16th, at a gala and dinner at Broadway’s Gershwin Theatre.

The Theater Hall of Fame was established in 1971 by Earl Blackwell, James M. Nederlander, Gerard Oestreicher, and L. Arnold Weissberger to honor theatrical professionals, encourage emerging artists, and preserve theatre history. All inductees must have at least five major Broadway credits and 25 years of experience working in the American theatre.

Explore the Gershwin and other Broadway theatres on Spotlight on Broadway, including views from the stage, theatre facades and architecture. Spotlight on Broadway is a multimedia project of the City of New York’s Mayor’s Office of Media & Entertainment to celebrate the unique, indelible legacy of Broadway and its forty theaters. Thanks to the thousands of men and women working on Broadway today, audiences continue to be delighted and enthralled by the Great White Way.

Explore this site to learn about each of the 40 theaters and their unique histories through videos, photos and text. On this site you’ll also meet some of the men and women who work behind-the-scenes on Broadway. When in New York access the website on your mobile device for a special walking tour experience of the district. Visit the Spotlight on Broadway permanent installation in the heart of the district at Duffy Square (the triangle bound by Broadway and 7th Avenue between W. 46th and W. 47th Streets) for a unique perspective on the theaters.

Highlight and right click links to open in a new tab. ABOUT THEATRE HISTORICAL SOCIETY OF AMERICA: Founded by Ben Hall in 1969, the Theatre Historical Society of America (THS) celebrates, documents and promotes the architectural, cultural and social relevance of America’s historic theatres. Through its preservation of the collections in the American Theatre Architecture Archive, its signature publication Marquee™ and Conclave Theatre Tour, THS increases awareness, appreciation and scholarly study of America’s theatres.