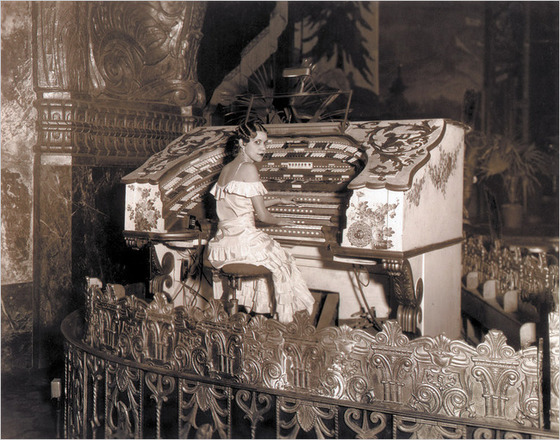 The New York Times featured this wonderful image of Rosa Rio, shown in 1934 at the Fox Theater in Brooklyn, where she had performed as the house organist. Ms. Rio died in 2010 at 107, after a career as one of the country’s premier theatre organists.

On Oct. 6, 1927, the day “The Jazz Singer” splashed noisily across American movie screens, Rosa Rio broke down and wept. Al Jolson was talking, and the very sound of him, she knew, would put her out of business.

But Miss Rio’s fears went unrealized, and for the next eight decades — until her final performance, last year — she built a career as one of the country’s premier theater organists.

Miss Rio was undoubtedly among the very last to have played the silent-picture houses, accompanying the likes of Chaplin, Keaton and Pickford on the Mighty Wurlitzer amid velvet draperies, gilded rococo walls and vaulted ceilings awash in stars. She was also one of the few women to have made her way in a field dominated by men.