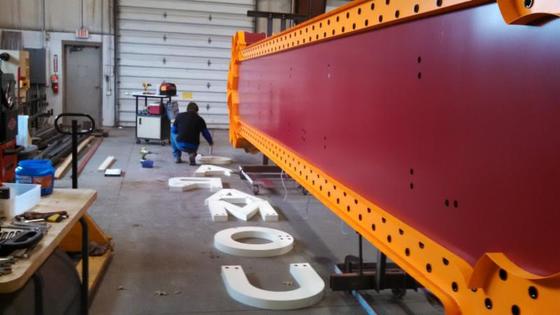 The Paramount Theater celebrated the conclusion of the 10th Anniversary of its restoration in a big way. On Tuesday, December 15 at approximately 5:45PM the Theater lit the newly-installed, reconstructed 33 foot historic vertical blade sign for the first time since the 1960s.

Chris Holden, Paramount Board Chair, welcomed the crowd and shared some of the history of the restoration of the Theater. David Toscano, the Virginia House of Delegates Democratic Leader read Joint Resolution No. 5255 that was passed by the Virginia General Assembly under his leadership, commending The Paramount in celebration of the tenth anniversary since the reopening of the restored theater.

Mr. Holden then announced that the $175,000 fundraising goal to complete the Blade Restoration project had been met, and credited local foundation, The Perry Foundation, for the final $9,000 gift that put the campaign over the top. Holden also thanked the community at large for their outpouring of support for the project, stating: “We are so grateful for the overwhelming support the Theater has received from the community and sincerely thank all of the individuals, businesses and organizations that have rallied around The Paramount throughout the 10th Anniversary celebration.”

The Blade Sign, the final remaining element to fully complete the restoration of The Paramount Theater, which began in 1992, was dedicated to: “The Children of Charlottesville – Past, Present, and Future Generations.” Youth from the crowd joined Chris Holden on stage and assisted with the official lighting of the sign for the first time.

Following its Thanksgiving Eve 1931 opening, The Paramount became a landmark overnight. Even though the theater came along during the decline of the American movie palace, and two years after the stock market crash of 1929, The Paramount thrived.

The Paramount remained Charlottesville’s crown jewel until 1974 when its doors closed for good. Even as the lights dimmed on the marquee, the theater was not forgotten. Almost from that moment, efforts were launched to save the theater from real and constant threats of demolition.

In 1992, the non-profit Paramount Theater, Inc. purchased the building. With a grant from the City of Charlottesville, the work began. The initial project – restoring the Main Street marquee – was selected for maximum visibility. After the marquee’s structure and finishes were examined, microanalysis of the paint determined original colors. At midnight on that New Year’s Eve, the marquee’s lights shone brightly on Main Street for the first time in a decade. The Paramount seemed ready to begin life anew.

Progress continued with the hiring of Washington architectural firm Martinez & Johnson Architecture, in partnership with Charlottesville firm Bushman Dreyfus Architects. The 16.2 million dollar project includes not only the meticulous restoration of the theater, but also the creation of new facilities enabling The Paramount to step into its new role as a regional performing arts center – a modified fly loft, backstage areas, orchestra pit, and a three-story annex building with computerized box office, ballroom and meeting spaces, and a community rehearsal room.

Restored to its former glory, The Paramount Theater opened its doors to the public once more on December 15, 2004 – more than thirty years after it had closed. The theater is again a gathering place for Charlottesville and the region. Because of the efforts of so many – the architects, engineers, contractors, contributors, staff, volunteers, and of course the wonderful community who has shown such enduring support – The Paramount is not only a place to remember the past, but to celebrate the future.

Follow this link for more information about the project, including a photo gallery with images from the restoration process. http://www.theparamount.net/blade/

Read more about the Paramount’s history and restoration on its website. http://www.theparamount.net/theater-info/history-mission/ 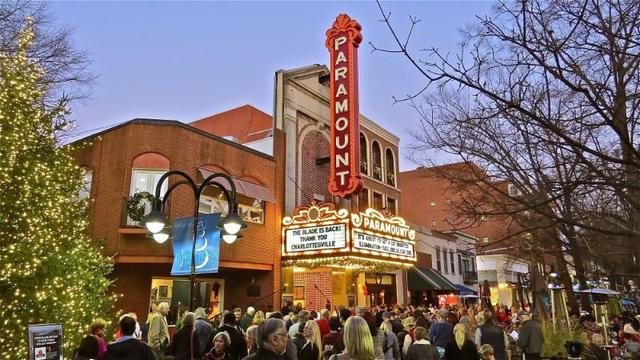