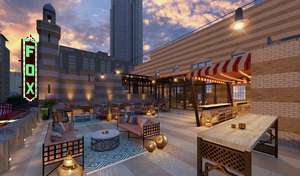 From The Atlanta Journal-Constitution: Imagine sipping a hand-crafted cocktail with the iconic Fox marquee glimmering behind you as you overlook the hustle and bustle of Atlanta’s Peachtree Street. Come fall 2017, it won’t just be a dream.

The Fabulous Fox Theatre’s renovation of a 10,000-square-foot event space into the new Marquee Club lounge and rooftop marks its most significant expansion and its biggest financial undertaking since the popular theater opened in 1929.

Patrons will have access to the club’s five bars: one on the main level of the club, one on the mezzanine level and three on the rooftop.

With a server-to-guest ratio of 10-to-one, line-busting technology and intermission pre-ordering, members will be able to enjoy their shows with ease.

The intricate Moorish grillwork and color palette of muted gold and earth tones throughout the club were chosen with the historic building in mind, Adina Erwin, Fox Theatre’s vice president and chief operating officer, told The Atlanta Journal-Constitution. “The Fox was our muse,” she said.

A hint of blue brings in the element of the sky and the Fox star can be found on both the carpeting and on the club’s main level ceiling.

The rooftop will feature covered, partially covered and fully uncovered areas with bars in each, not only to offer patrons a few more options but also to allow year-round access to the premium space.

According to Alan C. Vella, president and chief executive officer of the theater, the idea for the new lounge originated from focus groups’ desire for premium amenities for Atlanta’s Broadway presenter and the rising competition from venues like the Cobb Energy Performing Arts Centre, Braves’ SunTrust Park and the Falcons’ Mercedes-Benz stadium, which all offer premium spaces and opportunities for their patrons.

Memberships for the Fox Theatre’s Marquee Lounge, Vella said, will be available as annual, corporate, individual and show-specific packages, but prices have not been released.

Link to the story, with more photos, at: http://www.myajc.com/news/places/theater/fox-theatre-to-add-moroccan-style-lounge-rooftop-b/nsqTL/ 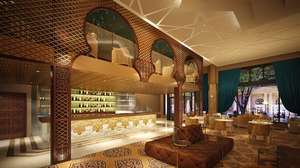 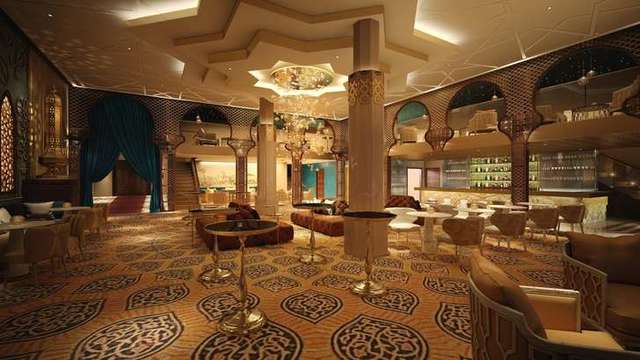 They needed to put some Blue LED lights in the ceiling. What will all the party people do when It starts to rain outside on the patio? Outside patio needs some sort of waterfall/fountain feature with a Moroccan look and color lights. Is this new space were the old apartment was that they tried to kick out the long time senior renter?