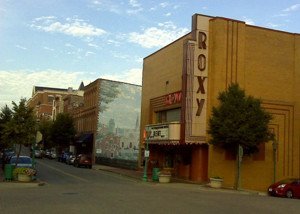 From BroadwayWorld.com: In 1980, after the last credit rolled off the big screen at the final showing, the Roxy movie theater closed it doors, reopening three years later as a live performance theatre.

“After years of our box office fielding calls about what movies were being shown, and with the introduction of many new programs at the theatre this season, the timing was perfect to bring film back to the Roxy,” Bowie notes. “Our goal, moving forward, is to try to appeal to the needs and wants of the entire community. If Clarksville wants film back in this iconic theatre, then we are going to work that into our programming for the future.”

Sponsored by Planters Bank, the series will feature vintage flicks and modern classics, presented on Sunday afternoons in the theatre’s 153-seat auditorium.

“Planters Bank is thrilled to be involved with film being introduced back at the Roxy Theatre,” says Suzanne Langford, Middle Tennessee Senior Marketing Executive for Planters Bank. “There are many people who have fond memories of going to the movies at The Roxy and Capitol Theatres in downtown Clarksville so many years ago. The film series will provide a great way for family and friends to spend Sunday afternoons in downtown Clarksville, making new memories while enjoying the jewel that is our Roxy Theatre. Planters Bank is delighted to play a part in this exciting new endeavor.”

In anticipation of Halloween, the inaugural showing in the series will be the 1993 comedy Hocus Pocus on Sunday, October 23, at 2:00pm.

Originally purchased for a project through the Tennessee Arts Commission’s Creative Placemaking grant program, the equipment for screening the films is on permanent loan to the theatre from the Clarksville-Montgomery County Arts & Heritage Development Council.

“The Arts & Heritage Development Council recently collaborated with the Roxy in airing a film series about Clarksville’s past, present and future. The series was produced through a grant from the Tennessee Arts Commission, and funds from the grant purchased a projector and screen,” says Ellen Kanervo, Executive Director for the Clarksville-Montgomery County Art & Heritage Development Council. “We thought there could be no better way to continue the spirit of the grant than by bringing downtown Clarksville’s past — when locals gathered at the Roxy to see the latest "picture show” — into its present and future — when locals can again gather at the Roxy to see some of those same productions. We are pleased to offer the projector and screen to the Roxy to show movies once again in this historic venue."

Admission to each film in the “Planters Bank Presents…” series is $5 (cash or check only). Tickets will only be available at the door one hour prior to showtime, and popcorn and bottled water will be available as concessions. Upcoming films include the following:

Halloween night will never be the same after three 17th century witches (Bette Midler, Sarah Jessica Parker and Kathy Najimy) are accidentally conjured up in present-day Salem, where they brew a hilarious cauldron of mischief and mayhem!

In this much-loved musical adaptation of L. Frank Baum’s classic novel, Kansas girl Dorothy and her dog, Toto, are whisked by a tornado into the magical land of Oz, where they are joined by the Tin Man, the Scarecrow and the Cowardly Lion on an adventure down the Yellow Brick Road to persuade the Wizard to help her find her way home.

Elliott, a lonely young boy, summons the courage to help a friendly alien escape Earth and return to his home-world in this classic sci-fi adventure which captures that strange moment in youth when the world is a place of mysterious possibilities, and the universe seems somehow separate from the one inhabited by grown-ups.

Archaeologist Indiana Jones (Harrison Ford) is hired by the U.S. government to find the Ark of the Covenant before the Nazis in this action-packed adventure, the first in the original trilogy cooked up by the dream team of Steven Spielberg and George Lucas.

In Frank Capra’s classic holiday comedy/drama, an angel (Henry Travers) helps a compassionate but despairingly frustrated businessman, George Bailey (Jimmy Stewart), by showing what life would have been like if he never existed.

A successful pair of nightclub entertainers (Bing Crosby and Danny Kaye) become romantically involved with a sister act (Rosemary Clooney and Vera-Ellen) and team up to save the failing Vermont inn of their former commanding general in this musical romantic comedy featuring the songs of Irving Berlin. 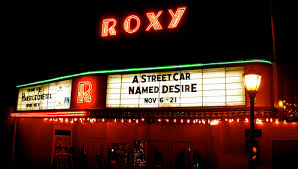