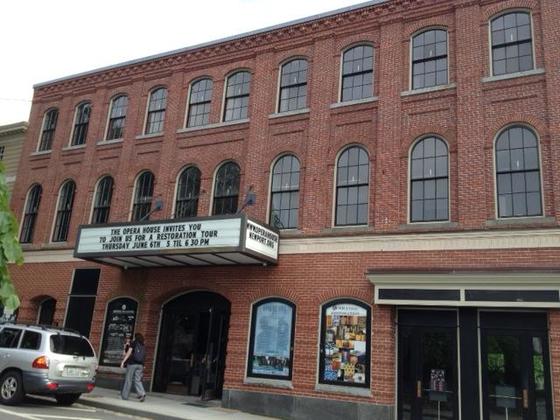 From WhatsUpNewp.com: While the Opera House Theater presents Lost Newport tonight at its partner venue, Jane Pickens Theater, the nearby doors of the opera house remain closed as renovations continue in advance of its December 2017 opening. The revitalization of Rhode Island’s oldest surviving theater building began in spring of this year and involves major structural work as well as finely detailed artistry required to restore the interior’s decorative elements. Wonder what it looks like inside? To find out, we stopped by the Opera House for a behind-the-scenes tour. One of the first things we noticed when looking at old pictures of the Opera House was the mansard roof, an architectural element not there today. “The roof was lost in a fire in 1950s,” explained Ivan S. Colon, the Opera Houses’s head of Business Development. “We are adding back the top floor.” In addition to the mansard roof’s restoration, the addition of the 4th level will include a rooftop garden and atrium.

Inside, the Opera House Theater has gone through several major iterations since its original construction in 1867, the Opera House’s Executive Administrator Liz Drayton explained, and right now, the space is in the midst of its next big change. From a performing arts and civic center in the 19th century, to its 1929 rebirth as motion picture palace, to its transition to a triplex movie theater in 1979, the Opera House continues to adapt the changing needs and cultural landscape of Newport. We’re focusing on the structural aspects first,” Drayton said, “Structural steel arrived this month and major reinforcement work is now happening on the 4th floor.” Once major construction work is completed, the team will then focus on the finer details. “We’ll then move on to restoration of plaster, decorations, and installation of state-of-the-art stage lighting and sound equipment,” Drayton said. “We’re doing color analysis on the original paint so we can match the decorative elements from 1929.” The most eye-catching feature of the 700 seat theater is the proscenium arch, which is sure to be breath-taking once fully restored. “It was actually hidden behind movie screens after the space was converted into shoebox theaters in the 70s, Drayton said. Formerly flanking the arch were organ pipes whose parts have been donated to the Zeiterion Theatre in New Bedford, MA, Hanover Theatre in Worcester, MA, and Babson College in Boston. “We like to say we are ‘organ donors’,” Drayton said. On the second and third floors, large arched windows overlook Washington Square and will provide excellent natural lighting for an event space and offices. The restoration project is being funded by a $4.2 million cultural bond grant from the State of Rhode Island, the McBean Charitable Trust, and other individual support. To learn more about the history of the Opera House and its future plans, visit operahousetheaternewportri.org

Link to the story, with more photos, at: http://whatsupnewp.com/behind-scenes-newport-opera-house-theater-restoration/ 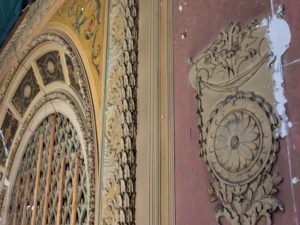 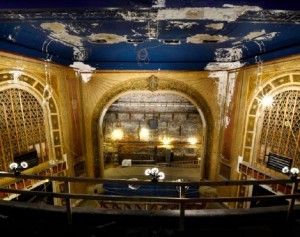