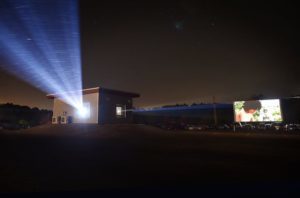 From dmagazine.com: If recent trends in new theater openings in North Texas can tell us anything, it may be that people really enjoy eating and drinking while watching a movie, simplifying the classic “dinner and a movie” combination. We’ve also seen the rise of zero tolerance policies for cell phones, extra-cinematic programming, and the promise of “luxury” seating as theater attendance continues to decline.

A more traditional experience hasn’t completely lost its sway with moviegoers, however. It’s too early to call it a comeback, but a new drive-in theater opening Friday in Lewisville could qualify as at least a tentative revival of a throwback American night out.

It’s the third such venture from Coyote Drive-In Theaters and Canteen, which opened its first outpost in Fort Worth in 2013 and expanded to Leeds, Alabama earlier this year. (The two Coyotes join the Galaxy Drive-In in Ennis and the Brazos in Granbury on North Texas’ lineup of drive-in theaters.)

The theater, at 1901 Midway Rd. off the 121 Tollway, will have five screens digitally projecting double features of first-run movies seven nights a week, according to a press release. Most of the screens — there are plans for a sixth — stand about 55 feet tall and 75 feet wide. The complex can fit about 1,500 cars.

There are, of course, plenty of modern amenities added to this nostalgia trip. Audiences in the drive-in heyday of the ’50s never knew the unique, late capitalism joys of “Pepsi Spire 5.0 drink systems,” for example. Per the press release from Coyote:

In the center of the grounds stands a Canteen – a restaurant and bar pavilion with indoor and outdoor covered seating for 300 guests, fitted with ten high-definition big-screen TVs – perfect for football, baseball and soccer game days.

Within the Canteen area, patrons can enjoy hand-crafted pizza, burgers, wings and tenders from the full-service kitchen in one hand and the traditional concessions like giant pretzels, churros, popcorn, candy in the other. Coyote Drive-In comes complete with a Beer & Wine bar, featuring many craft beer favorites and frozen wineritas. Coyote also prepares Sno-Cones and Cotton Candy on site and has a Merchandise Shop. And to top it off, the theater is one of the first in Texas to carry Pepsi Spire 5.0 drink systems, a state-of-the-art refreshment dispenser with over one hundred Pepsi flavor combinations to choose from.

Some people will try to tell you America used to be greater than it is now, but in what other era could you choose from 100 Pepsi flavor combinations?

Tickets to the Coyote Drive-In are $7 for adults, $5 for kids between the ages of 5 and 11, and free for children younger than 4. Gates open at 5:30 p.m. and showtimes begin just after sunset. 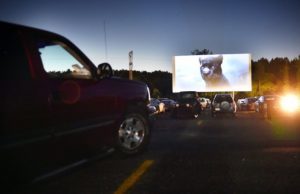 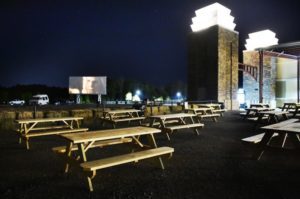