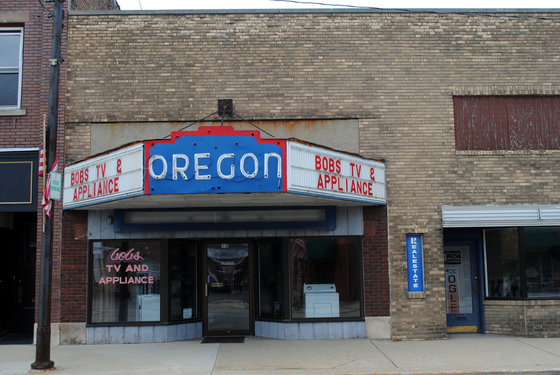 Hopper, who recently opened Hopper’s Poppers in Oregon, said his family has been in the movie theater and popcorn business for decades. And he brought his successful popcorn formulas from Sycamore to Oregon to give locals a taste.

And judging by opening day – Sept. 31 – he has another hit on his hands.

“We had a line out the door waiting for us to open,” he said. “The building inspector was still in here inspecting.”

That opening weekend – the weekend of Autumn on Parade – Hopper said they went through 150 pounds of popcorn.

Hopper has not only opened a new business in Oregon – selling popcorn, candy and other treats – he has purchased the building at 104 N. 4th St., which is next to the closed movie theater that currently houses an appliance repair shop, moved his family to town and is looking at the possibility of renovating and opening the theater. (see sidebar story).

“I really see Oregon as being one of those up-and-coming towns,” he said “That is one of the reasons why we chose to move to Oregon.”

“It got so popular, I had to upgrade all of my equipment there, to larger equipment,” he said.

Hopper said the secret to his success is how he makes and keeps his product.

“We use high quality food,” he said. “We use coconut oil for our oil. I made my own recipe for the popcorn, so it’s not just generic run of the mill popcorn.”

And once the popcorn is ready, it is held in crispers to keep it fresh. He said it won’t dry out and it won’t get too soft.

And then there are the flavors. There are nine flavors on hand, but different flavors come in and out of the menu all the time. Hopper said he will always have cheddar, carmel, chocolate and cake popcorn. There is also kettle corn and a wide variety of cheese popcorn.

“Carmel is always the best, by far,” he said. “Everyone comes in to try the cake, though. Not everyone has cake popcorn.”

I’ve been to that old appliance repair shop before. Would love to check out the theater if it’s still there. I thin kthe guy wh oworked at the shop works in Canada now. Read more about that. It’s amazing what you can do with a historical building.

I do not know what to say really what you share very well and useful to the community, I feel that it makes our community much more developed, thanks game guides

I was hoping this popcorn business would pop-off so that the theater would reopen. But, when I read about his theater a few years ago, I was disappointed. It is not what I wanted.