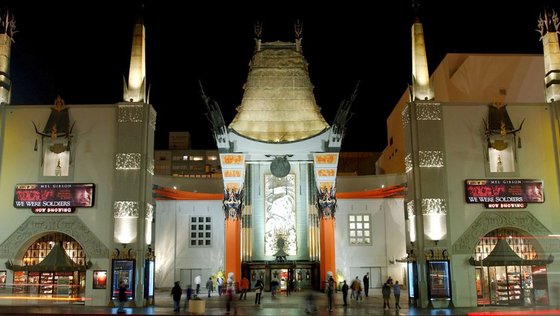 From The Hollywood Reporter: A rep for TCL declines to comment, but known Los Angeles documentarian Alison Martino celebrates a victory for Hollywood preservationists: “Power to the people. Social media is an incredible force.”

A slew of souvenir carts and kiosks have been removed from the sidewalk in front of Hollywood’s TCL Chinese Theatre, where the structures were blocking access to historic handprints, footprints and signatures of beloved stars such as Jean Harlow, Bette Davis and Lana Turner.

The removal comes after a dust-up on social media kick-started by noted Hollywood documentarian Alison Martino and her Vintage Los Angeles Facebook page, which posted a photo on Sept. 30 taken by Brian Donnelly. The image showed a retail structure selling inexpensive hats and T-shirts while covering iconic cement blocks lining Hollywood Boulevard in front of the theater. “How incredibly disrespectful,” the post reads, as seen below. “If Lucy and Ethel were to try and steal John Wayne’s footprints today, they couldn’t even find it! This is not a pretty sight TCL Chinese Theatres!”

The post generated more than 750 comments and 530 shares and was enough to launch a Change.org petition requesting the removal of the vendor carts from the forecourt, as well as a news story on Curbed Los Angeles. The petition, signed by more than 2,600 supporters as of Monday afternoon, called for the removal of the carts out of respect for Hollywood history and the millions of tourists who flock to the block each year.

“Capsules of Hollywood history, the cement blocks are precious to film enthusiasts all around the globe, many of whom travel a great distance to visit the forecourt and have the opportunity to see their favorites’ blocks,” the petition reads. “The current situation of the vending carts directly on top of the blocks reduces all citizens’ enjoyment of the forecourt, and does not even allow many visitors to see some of the blocks, being entirely covered by carts.… Please don’t allow commerciality to overshadow the history contained there.”

While it can be assumed that TCL opted to move the retail structures following the controversy, it’s not confirmed, because a rep for TCL Chinese Theatre declined to comment. It remains unclear where the vendor carts will go, though a source indicated they may be relocated to the nearby Hollywood & Highland mall.

Martino offered to talk, telling The Hollywood Reporter that she drove to the block on Monday once she heard that the carts were no longer in place. “It’s unbelievable — power to the people,” she said, crediting Donnelly with the original image and Elena Parker for launching the petition. “I’ve been operating the Vintage Los Angeles page for five years and I’ve never seen a reaction like this. The outcry and outrage grew really fast. My VLA community really took it to heart. It was their passion and perseverance that drove this. Social media is an incredible force.”

I’m surely use willing to you might need. This can be a sort of owners manual which needs to be taking into account but not the entire unintended false information this is along the a number of blog pages. Treasure all of your placing this kind of really file.Bigg Boss 15

You know your projects stand out of the herd. There is something special about them. It seems to me all of them are really brilliant! Mobile Mots Burghfield

Awesome article! I want people to know just how good this information is in your article. It’s interesting, compelling content.
MOBILE MECHANIC NEAR ME UK

Some truly wonderful work on behalf of the owner of this internet site , perfectly great articles . Servicing offers Reading berkshire

This content is written very well. Your use of formatting when making your points makes your observations very clear and easy to understand. Thank you. Servicing offers Reading berkshire

I’m surely use willing to you might need. This can be a sort of owners manual which needs to be taking into account but not the entire unintended false information this is along the a number of blog pages. Treasure all of your placing this kind of really file.dramacool

I’m surely use willing to you might need. This can be a sort of owners manual which needs to be taking into account but not the entire unintended false information this is along the a number of blog pages. Treasure all of your placing this kind of really file.Yeh Rishta Kya Kehlata Hai

I’m surely use willing to you might need. This can be a sort of owners manual which needs to be taking into account but not the entire unintended false information this is along the a number of blog pages. Treasure all of your placing this kind of really file.Naagin 6 Watch Online

I truly wanted to post a word to be able to thank you for all of the fabulous guides you are writing at this website. My time intensive internet investigation has now been compensated with good quality details to share with my partners. I would declare that many of us website visitors are rather fortunate to live in a wonderful website with many special individuals with helpful concepts. I feel very fortunate to have used your entire web site and look forward to some more enjoyable minutes reading here. Thanks a lot once more for a lot of things.Talk to astrologer

Your blog is amazing dude. i love to visit it everyday. very nice layout and content ,  numerology business name

Can I just say such a relief to find someone who in fact knows what theyre referring to online. You actually know how to bring a concern to light to make it important. More people need to check this out and understand this side in the story. I cant believe youre less popular since you certainly develop the gift.Yeh Rishta Kya Kehlata Hai

Good day! This is my first visit to your blog! We are a team of volunteers and starting a new project in a community in the same niche. Your blog provided us valuable information to work on. You have done a outstanding job!Sa Re Ga Ma Pa

You really should take part in a contest for starters of the finest blogs over the internet. I am going to recommend this page!The Kapil Sharma Show

Precisely what I was searching for, thanks for posting .India’s Got Talent