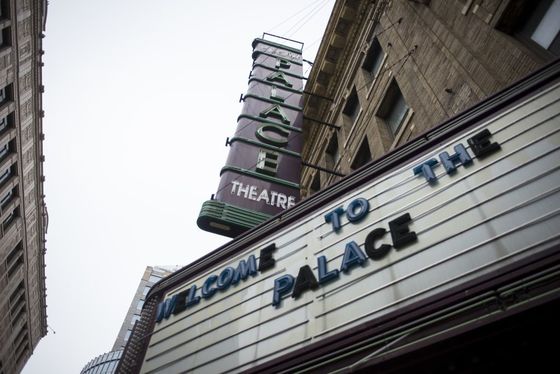 From the Star Tribune: The Palace Theatre in downtown St. Paul looks to be in ruins right now. And that’s a good thing.

After three years of financial and governmental wrangling, renovations on the 100-year-old former vaudeville and movie house are well underway — 32 years after its marquee went dark over what’s now the 7th Place walking plaza between Wabasha and St. Peter streets.

With a $14.7 million price tag, the city of St. Paul is making over the theater into a 2,800-capacity concert venue that will be co-managed by Minneapolis’ First Avenue nightclub. Not only could the new Palace reignite nightlife in the capital city, it could reshape the Twin Cities concert scene on the whole.

Aside from preliminary repairs to a roof that had likely been leaking for decades, major construction began in October.

Among the heavy lifting so far has been removal of the seats on the ground floor, making room for an open, tiered, standing general-admission area that will set the Palace apart from the Twin Cities’ other downtown theaters — and make it more attractive to performers who don’t want to play to seated crowds. About 800 seats will still be in use on the theater’s large balcony.

The Palace is comparable in size to Minneapolis’ two largest theaters, Northrop and the Orpheum, but with the general-admission floor its capacity is a hundred or two more.

Other construction work along the way has included more roof repairs, installation of support beams and demolition of various walls and false ceilings that were put in decades after the theater’s 1916 opening. Charlie Chaplin and Groucho Marx were among the names on the theater’s marquee.

As of Thursday afternoon, when St. Paul Mayor Chris Coleman showed off the renovations to a couple of journalists, the plan was still to reopen the theater by year’s end to hit the Palace’s centennial anniversary mark.

“I’ve been salivating for 15 years to get this amazing space open again,” Coleman said.

Funding for the theater’s refurbishment came primarily from a combination of grant money from the state of Minnesota ($5 million) and bonds that the city cashed in ($9.7 million). The city bought the building from Kelly Bros. for about $325,000.

The estimated $14.7 million final price tag is relatively cheap for a theater rehab job. Renovations to the Pantages Theatre in downtown Minneapolis — which was similarly boarded up for several decades — cost about $9.5 million, but that was 14 to 15 years ago for a venue almost a third the size of the Palace.

The city is able to pull off the Palace job at this price because it’s not doing a full-scale makeover. Some of the rough-edge elements that are visible in the theater right now will be left in — features such as exposed brick walls and steel beams, and ornate ceiling molding that was weirdly ripped up in a boneheaded 1940s-era makeover. That’s around the time when it changed into the RKO Orpheum movie theater.

“It’s not a full restoration,” clarified the mayor, who thinks rock and hip-hop fans will dig the roughed-up, gutted features when it’s done.

“It’s going to have funky edges, which is one of the reasons it’s intentionally being designed as a place for concerts. The bigger reason is the acoustics and the sight lines are just so perfect for concerts.”

The mayor likened the as-is look to that of the Ruins Courtyard at Mill City Museum in Minneapolis. Joe Spencer, the mayor’s arts liaison and go-to guy on Palace business, thinks of it as a bigger version of Minneapolis’ charmingly rugged Southern Theater.

“Essentially, everything that’s not a new feature we’re putting in now will be an original element of the theater that dates back to 1916,” said Spencer.

The Palace’s new features will include the four tiered levels on the ground floor, long bars at the back of the floor, remade green rooms and office areas in the basement, and disability law requirements such as an elevator and accessible restrooms.

Once the bones of the building are back in shape, the city will work with First Avenue and other partners to install production aspects of the theater, such as sound and lighting equipment.

“It’s getting exciting for us now,” said First Ave general manager Nate Kranz. “We’re getting to the point where we’re making decisions that are more in [the club’s] wheelhouse, such as bar designs, layout and green rooms. That’s a lot more interesting than HVAC and leaky-roof kind of stuff.”

Ready to book the bands

Both independent mainstays of the concert industry that have partnered on shows for decades, Jam and First Ave are forming a new 50/50 company to operate the Palace. Their contract with the city requires a minimum of 45 events per year, plus opportunities for community groups and schools to produce events there on a nonprofit basis.

Kranz said they’re not yet making formal contract offers to bands for concerts there, but “we’re definitely thinking about it. A lot of names are already floating around for 2017.

“There are so many bands that don’t want to do seated shows in Broadway-style theaters. This really gives those bands a perfect new option.”

New, but truly historic — and rustic, too.

Link to the story and video: http://www.startribune.com/take-a-look-inside-st-paul-s-palace-theatre-overhaul-soon-to-be-a-major-concert-destination/369439772/ 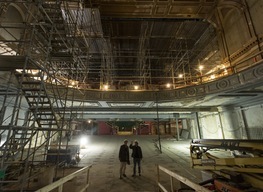