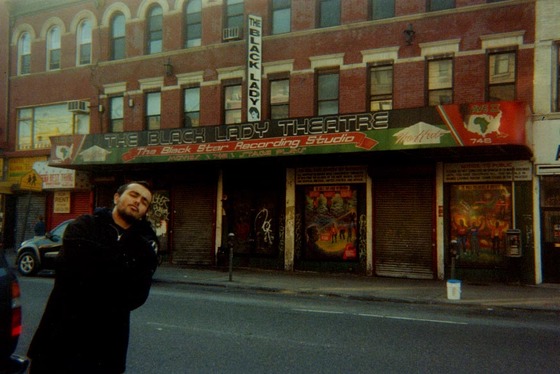 From Our Time Press: In the pioneering spirit of barn-raising, The Black Lady Theatre at 750 Nostrand Avenue in Brooklyn is being renovated. Leading the extensive rehabilitation are Clarence, Jr. 2X and Omar Hardy, the father and son team who dedicate themselves to realizing the wishes of the deceased Supreme Court Judge John L. Phillips.

The theater encompasses much of the 5,325-sq.-ft. lot. The 500-seat theater space is located in the basement where carpenters have recently installed a new wooden stage. The balcony and lobby are on the first floor and the conference area is on the second floor. Omar Hardy explained, “The plan is to build two additional floors. The roof will hold a garden and an event space”.

This project comes together through a friends-helping-friends construction process. Mark “The Builder” Douglas is the construction manager. Douglas is a licensed and insured electrical contractor who secures the subcontractors. Douglas explains, “The objective is to uplift our people to be self-sufficient. Professionalism, being on time and qualified are essential”. Douglas brought on Sheldon Douglas, who is a carpenter, and CSGN Contracting’s Johnny E. Robayo, a glass and façade contractor. It is Robayo’s installation of the glass front that achieves the visual impact of the rebirth of “The Black Lady”.

Given the low level of financing, the team has relied heavily on volunteer labor. For example, Omar’s younger brothers, Devon and Isaiah Howard, do “soup to nuts…from site preparation to finishing”.

The marketing firm Open House New York promoted the grand reopening weekend of October 15-16, 2016 free of charge. Standing in front of the gleaming glass doors that reveal many murals in the lobby, Mark Douglas estimates the work will be completed by December 2016. To mark this milestone, the Hardys and Douglas are in preliminary discussions with the producer of “Oz Comes to Brooklyn”. Douglas gives the last Sunday in December as the tentative performance date.

“I was born for this task and my father always wanted to do business with his family,” muses Omar Hardy. He believes getting to this point where the public can see the theater is coming back to life is due to “remaining on our square and staying true to the mission”.

Further, Wilson intends to use smart building procedures. He plans to set up solar canopies and an aquaponic greenhouse that grows food. Wilson asserts, “This will be a farm-to-table operation where we sell to local bodegas. The aquaponic greenhouse uses the waste of tilapia fish. The fish itself will not be sold for consumption”.

Between April and October 2016, the team has accomplished clearing the theater of rubbish. “We’ve filled 20 containers with trash. We financed the carting company’s services through fundraisers. One hundred bags of rubbish were picked up by the NYC Sanitation Department,” explains Hardy.

This reporter had a sit-down interview with Omar Hardy on October 27, 2016. In preparation of the meeting, records within the NYC Finance Department, Buildings Department and the Environmental Protection Department on the premises were reviewed.

Q: Has your organization contacted Brooklyn Community District Office No. 8 to request to make a presentation before the community or to just leave event notices at community board meetings?

Hardy: Information drop-offs would be done through Zulika Bumpus (another team member). I’m not sure whether the event notice was left at the district office or at a general meeting. I recognize that I should present to the community what is happening at The Black Lady Theatre.

Note: Zulika Bumpus was contacted by telephone and e-mail on October 27, 2016 to inquire about outreach to local high schools, houses of worship and Brooklyn Community District Office No. 8. Bumpus explained on the telephone that she was leaving for an event and has not answered the e-mail.

Q: Have you contacted any local houses of worship to notify them about the rehabilitation occurring at the theater?

Hardy: We haven’t had contact with the local houses of worship. As far as having them know about the rehab, No. We’ve reached out to individuals, organizations and anyone who I believe should know. I’ve been thinking in terms of after the construction is completed and the place is ready for rental.

In all, the Q-and-A session was driven by 13 questions. It was revealed the development team’s community outreach was limited due to the decision to postpone community outreach until after the construction is complete. They have not communicated with Crown Heights North Association (CHNA). This organization has a successful track record of historic landmark district designation. Given the artistic and historic value of this theater, developing a strategic alliance with CHNA would be prudent. From April 2016 to October 2016, the work consisted of site preparation, painting, glass front installation and floor tiling. Hardy could not say which floor would be 75% complete by December 31, 2016.

The types of trades that have been on-site at any given time include security (provided by a private company and internal surveillance), electricians, carpenters and a plumber.

A New York City research agency uncovered two critical conditions: 750 Nostrand Avenue, Block 1240, Lot 38 was part of an assignment of a tax lien, document date April 30, 2016, where Party 1 is Bank of New York Mellon and Party 2 Bank of New York Mellon. A Tax Lien Sale Certificate was entered into record on August 10, 2016. Mr. Hardy acknowledges, “The tax issue needs to be handled. It is part of the reason for his focus on completing key rehabilitation areas”.

“Opening the doors to the community is critical [because] it permits us offering programs to the community that generates revenue” may be a guiding mantra that Omar Hardy keeps in the forefront of his mind. In view of this direct action, it behooves this committed team to direct its legal counsel to respond to the property vesting action.

Link to the story: http://www.ourtimepress.com/the-black-lady-theatres-restoration/