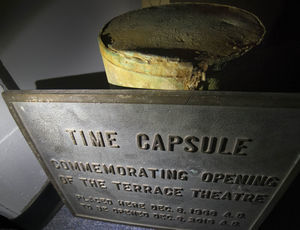 From Greensboro.com:
It starts with an email.

Would you find out what happened to the time capsule buried near the box office of the old Terrace Theatre at Friendly Center?

The theater, torn down to pave the way for a Macaroni Grill in 2002, long had been a favorite haunt of his, Mike Evans says. A 10-minute walk from home, he went there often as a child. He saw “2001: A Space Odyssey” three times there.

The theater opened on Christmas Day 1966 with Walt Disney’s “Follow Me Boys,” according to a Greensboro Daily News article that year. Earlier that month, community members buried the time capsule, which would be opened in 50 years.

“It’s just something that I have thought about on occasion,” says Evans, who was 7 when the theater opened. “I realized that this was the year — 50 years.”

So our quest begins.

We start with Brad Rogers, general manager at the Friendly Center.

Do you know whatever happened to the time capsule?

It’s not here, Rogers tells us. The owners took it with them to their new theater when the Terrace was razed.

“It was a big deal in the community when it happened,” Rogers says.

They got calls about it all the time, she says.

The Bennett family owned the Terrace for the last 13 years it operated. The six-screen cinema closed in April 2000, losing a battle with age and competition — Consolidated Theatre’s 16-screen The Grand opened at Friendly Center in March that year.

When the Terrace was torn down to make room for the Macaroni Grill, the family took the time capsule to their new theater on Battleground Avenue, Bennett says. The family operated a series of theaters through their company, Janus Theaters.

“When we left Friendly, Friendly said they were getting calls about the time capsule,” Nina Bennett recalls. “They said come and get it. We went over there and dug it up.”

It ended up at the Bennetts’ new theater, the Carousel Luxury Cinemas, which opened in 1999.

They didn’t bury it again, Bennett says. Best she recalls, it was still in the theater somewhere.

However, the Bennetts sold the Carousel in 2014.

We follow the trail again, this time to developer Marty Kotis, who bought the Carousel and rebranded it RED Cinemas as part of his “restaurant entertainment district.”

The idea of that history just lying around intrigues Kotis, who sets out to search the theater.

In a projection room they find the time capsule and plaque — the one Evans stared at every time he stood in line to get his ticket at the Terrace.

“It’s been sitting back here for about 16 years,” says Jake Murphy, director of theater operations for RED Cinemas. “It’s still buried in a sense.”

Kotis says they’ll open the time capsule in a special ceremony on the planned date. In the meantime, it will be placed in a display case in the theater’s lobby.

So what’s in the time capsule? We know some of the items from news reports at the time. But we’re not saying for a very good reason — a free movie and meal are on the line.

RED Cinemas wants folks to guess what history got buried 50 years ago. You get to submit five answers. A right answer wins a free movie ticket. Get the most right and it’s dinner and a movie — on the house. (Kotis’ company owns the restaurant next door, the Traveled Farmer, which is expected to open the second week of November.)

The theater also plans to collect items for a new time capsule to be buried somewhere on the RED Cinemas property on Dec. 7. Suggest something they like and you can add to the treasures some future Greensboro residents will unearth in 50 years. (Murphy’s thinking he’ll offer an iPad. “So someone is going to say, ‘That’s how they used to communicate with each other?’”) Send suggestions to RED Cinemas on Facebook.

But first comes the opening of the 1966 time capsule.

Bennett believes children may have been invited to place items inside. She thinks water might have gotten into it before they unearthed the capsule.

Who knows what it will contain after five decades.

Evans wants to be first in line.

“I was hoping that it was there because I want to be there when it’s opened,” he says. “I was 7, so I was hoping I’d still be alive.” 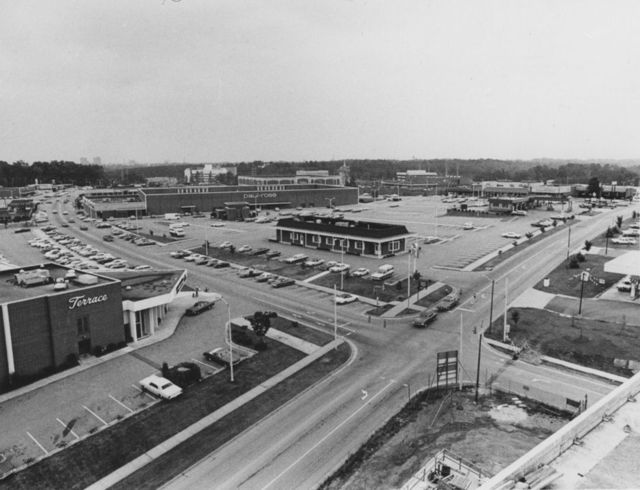 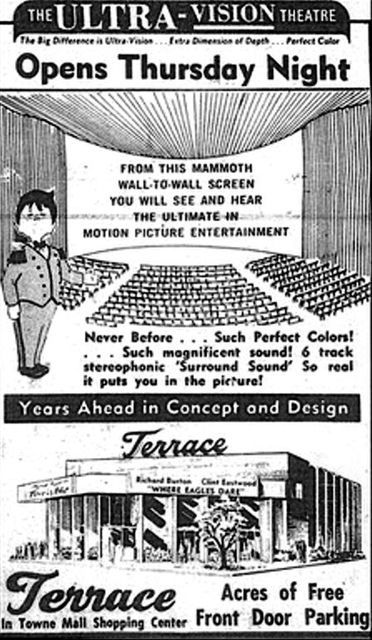 I’m hoping to see an update on this when it happens. I spent many nights photographically documenting the auditorium and nooks and crannies of a huge local theatre, the Genesee Theatre in Waukegan, IL, just before a $23 Million renovation began. In some areas it was like entering King Tut’s Tomb. It opened in the Vaudeville era but shortly needed to make way for film to survive. There were also something like 40 apartments, still there but abandoned, surrounding the theatre. If you are ever near Waukegan, north of Chicago, don’t miss seeing it. Even when the theatre isn’t open the box office has regular hours and sometimes one of the folks will be able to give you a peek at an amazing live performance venue.

Someone put up the ad for the opening of another Terrace Theatre that was located in Salisbury’s Towne Mall(in North Carolina)…this needs to be corrected. But if you look at the structure most of these theaters have the same architectural design in most cities(Durham, Burlington, Jacksonville, Asheville, Fayetteville, and Greensboro)…..quite the same. However, there should be posted the original Christmas Day advertisement for its opening from 1966.

The Terrace at Friendly Center had the 70mm engagements of “The Empire Strikes Back”, “Indiana Jones and the Temple of Doom”…..and also had the engagement showings for some of the biggest boxoffice hits to play the Terrace including “Jaws”,“Close Encounters of the Third Kind”, “Superman:The Movie”, “The Exorcist”, “The Sting”, “American Graffiti”,“The Godfather Part 2”,not to mention the reserved seat engagements for “The Sound of Music”, “The Sand Pebbles”,“Camelot”,“2001:A Space Odyssey”, “The Song of Norway”,among others.

More information on this theater is on Cinema Treasures. Opened in 1966 as a single screener and by March 1, 1974 was twinned. Expanded to three screens by the mid-1970’s and by the 1986 went from three to six screens before closing in 2000.